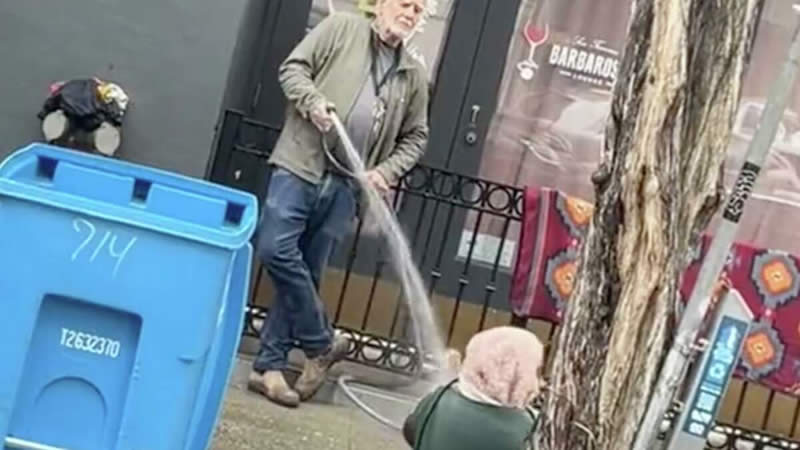 A San Francisco man has sparked outrage after a video surfaced of him spraying water on an unhoused woman near his business.

The video, which was shared on social media on Monday, showed art gallery owner Collier Gwin spraying a woman sitting on a nearby sidewalk with a garden hose, as PEOPLE reported.

“This is horrible,” one Twitter user who shared the footage wrote. “This awful man is spraying a homeless woman down with a hose. You can hear her yell, ‘Help Me!’ Does anyone recognize him? … This is inhumane and inexcusable.”

The video had nearly 4 million views on the account as of Wednesday afternoon and had been shared by others.

When contacted by phone, Gwin did not immediately respond. He told NBC affiliate KNTV that he had contacted the police and social services about the woman, who he claims are disruptive.

“There’s absolutely nothing that can be done. They’ll take her to a shelter, and they will turn her out in two days,” he added. “They will take her to the hospital, they will release her within a day.”

Gwin told ABC affiliate KGO-TV that he and others in the area tried to help the woman in recent weeks after she allegedly blocked entrances and sidewalk paths.

Gwin claimed that moments before the video was shot, he tried to help her in moving her belongings down the street and sprayed her with water when she refused.

“This woman is in a very, very sad situation,” he continued. “She’s very psychotic.”

“I said she needs psychiatric help,” he explained, adding that he and other business owners have frequently called the police in recent weeks. “You can tell, she’s pulling her hair, she’s screaming, she’s talking in tongues, you can’t understand anything she says, she’s throwing food everywhere.”

San Francisco police said in a statement to CBS affiliate KPIX that both parties declined further police action and that the “San Francisco Street Crisis Response Team responded to the scene and provided multiple service options” to the woman.

Modernizing the Art of Bespoke Tailoring