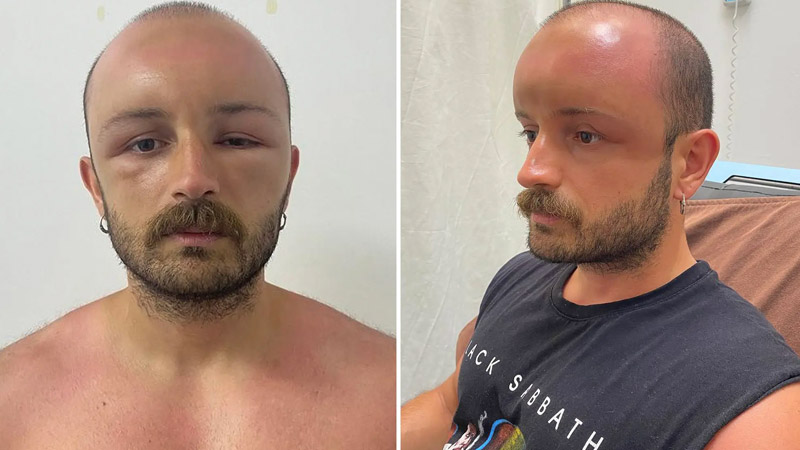 Doctors were baffled by this condition.

On August 23, a man in Turkey stunned medical professionals when his head began swelling to alarming levels after spending time on the beach in the city of Zonguldak, according to CEN.

Caner Arik, 33, an Istanbul call-center worker on vacation by the Black Sea in the country’s northern region, noticed swelling and distortion of his facial features on the third day and rushed to seek medical attention.

According to doctors at Zonguldak Bülent Ecevit University Health Application and Research Centre, his scalp was suffering from heat edema, an extremely rare condition that rarely extends beyond a person’s feet or hands.

“We have never encountered such a case before,” said Emergency Medicine Specialist Dr. Abdullah Cuneyt Hocagil. “After excluding the causes of localized edema in the body, we decided that the swelling on the forehead of the patient was a ‘heat edema’ . . . we started treatment for this.”

Heat edemas are typically caused by a buildup of fluids in the hands and legs as a result of downward gravity. According to the University of Michigan, they are caused by expanded blood vessels caused by high temperatures.

A hot day at the beach during a period of high humidity, according to Dr. Hocagil, is a shining example of the ideal conditions for heat edema to manifest.

The doctor also provided a rational explanation for why Arik developed heat edema.

“This happened when our patient was lying by the sea, while he was wearing a hat that would prevent circulation,” Dr. Hocagil said. “That’s why it’s an interesting case . . . We will publish this situation as rare heat-induced skin edema on the scalp at an international congress.”

Arik is now recovering at home, and doctors believe his symptoms will subside soon. He granted medical professionals to conduct a scientific study on his heat edema.

Luke Bell, a country singer, was found dead after going missing at the age of 32

GET YOUR OWN WAY: Burger King Employee Shoots At Customer Who Tossed Mayonnaise At Her