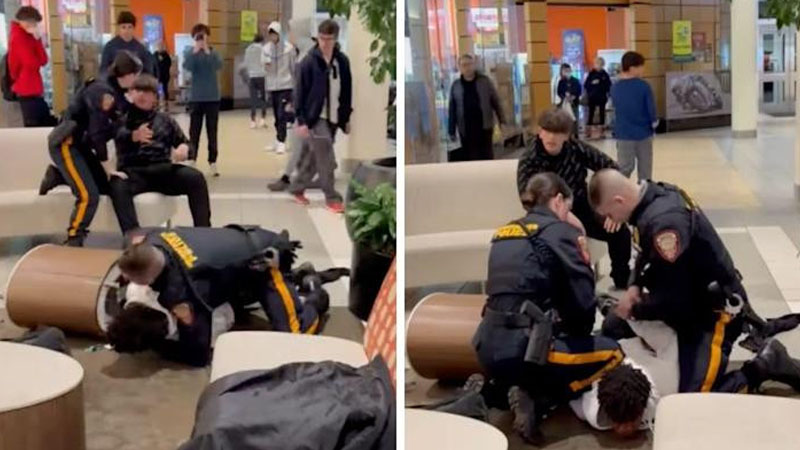 A mall fight in New Jersey resulted in the arrest of a Black teenager after a viral clip shows him standing to a white bully. Officers responding to a fight inside the Bridgewater Mall on Saturday (February 12) allowed the white teen involved in the fight to sit on a couch.

According to NJ.com, the video shows the two teenagers arguing and was shared on Instagram, Snapchat, and Facebook. Before the white teen put his finger in the Black teen’s face, the Black teen can be heard saying, “You gotta stop right now,”

A fight ignites seconds later. Two officers rush to the scene and pin the Black teen to the ground. The video shows one officer kneeling on the 14-year-old’s upper back, while the other kneeling on his lower back and putting cuffs on him.

“It’s cause he’s Black. Racially motivated,” a bystander can be heard saying in the video. The video ends as one of the officers walks over to the white teen. It’s not clear if he was also pinned to the ground and handcuffed.

The two officers are now under internal investigation.

A woman identifying herself as the 14-year-mother old’s told NJ Advance Media that her son, an eighth-grader, was defending his friend from the 16-year-old white teen. She reportedly told the outlet that neither of the younger teens knows the older one.

Her son was handcuffed for 30 minutes and taken to a mall security officer, according to her. Although no charges were filed against the teen, both were banned from mall properties for three years.

The mother also claimed that the mall told her they’d contact her about a broken table, but when she watched the video again, she realized the table was only broken after the officers tackled her son.

The woman confirmed she’s reached out to an attorney in the matter.

Meghan Markle Reportedly Doesn’t Care What Brits Think About Her