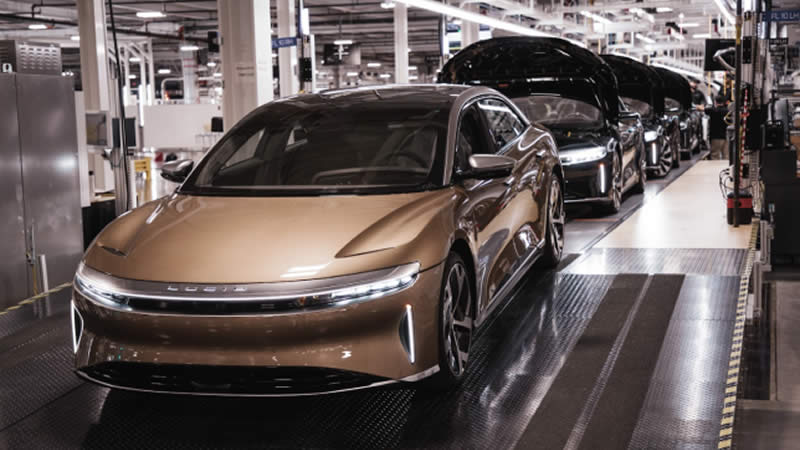 The Lucid Group, which is setting new standards with its advanced luxury electric cars, today announced the first customer deliveries of the Dream Edition starter version of Lucid Air, which sets new standards in range and efficiency for electric vehicles.

The first group of Dream Edition reservation holders is invited to collect their vehicles on Saturday, October 30th. The highlights will be shared on Lucid’s social media channels throughout the weekend. The Dream Delivery event follows the company’s start of production last month at the Lucid facility in Casa Grande, Arizona, the first all-electric vehicle manufacturing facility in North America.

Upon receipt of their vehicle, these first customers embark on the first Lucid Rally hosted by members of the company’s executive team on a route that demonstrates the vehicle’s breathtaking driving, handling and performance capabilities, before jumping off their personally configured Lucid Air leave. Dream Edition, which reflects the selection of range or performance models.

All Dream Edition models are equipped with a special 118 kWh version of the long-range battery pack from Lucid with 22 modules, which consist of a total of 6,600 cylindrical cells with a chemistry optimized for performance and range. The Dream Edition series reaches an estimated 520 miles on a single charge, according to the Environmental Protection Agency (EPA), making it the longest range of any electric car rated by the organization.

With a 112 kWh battery and a top speed of 7.4 miles per kWh, the Grand Touring delivers 7.4 miles per kWh, a mark only surpassed by another version of the Lucid Air. The Dream Edition Performance model delivers 1,111 horsepower, reaches 0-60 mph in just 2.42 seconds, and the quarter-mile (with 21-inch wheels and tire package) in 9.67 seconds – although it’s still the EPA’s manages an estimated 471 mph. (with a 19-inch wheel and tire package).

“Creating the Lucid Air has truly been a labor of love, with customer deliveries representing the culmination of years of endeavor from the entire Lucid team,” said Peter Rawlinson, CEO, and CTO, Lucid Group. “So I’m truly excited to hand the keys to our first dear customers and accompany them on an inaugural drive through the iconic California countryside.”

Lucid plans to offer supplies of 520 customized Lucid Air Dream Editions, followed by Lucid Air Grand Touring Editions. The Touring and Pure models are expected to be delivered to customers in 2022.