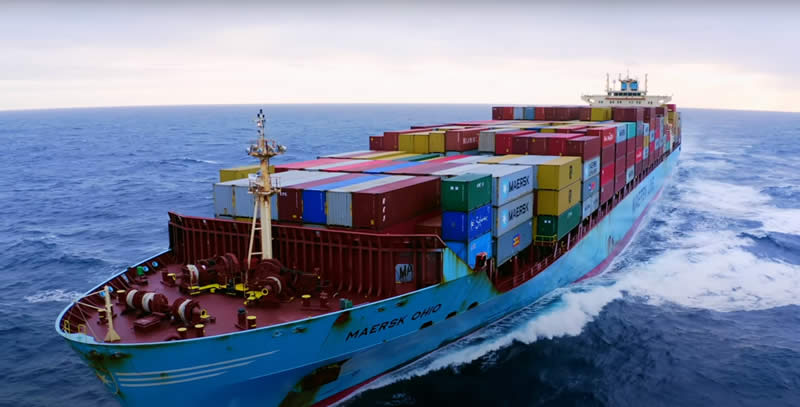 On a video tour of a Maersk cargo ship, a merchant marine caught life at sea. The video depicts the ship’s navigation technology as well as the crew’s living quarters. Second mate Bryan Boyle said his job has allowed him to go to many different places.

In 2019, a merchant marine gave a tour of a 958-foot cargo ship, demonstrating the complexities of hulking freighters that haul 90% of the world’s goods.

In the video, second mate Bryan Boyle records the massive array of machinery that keeps the ship moving, as well as the crew and officers’ living quarters on the Maersk ship, which was built in 2006.

Despite the fact that the movie was shot in 2019, Boyle told Insider that it gives a glimpse into the lives of shipping crews today, as hundreds of cargo ships await docking in US ports.

The ship’s journey begins in Norfolk, Virginia, and includes various stops in the United States before traveling to Belgium, Germany, and the Netherlands, to mention a few destinations.

“I’ve had the opportunity to work on some interesting vessels,” Boyle told Insider. “I’ve gotten to go to places that the average person wouldn’t even know about. It’s one of the most appealing aspects of the job.”

Boyle said it’s exciting to arrive at new places, recalling a trip to Africa where he spent over a month. However, as ships race in and out of ports as quickly as possible, and early COVID-19 rules limit staff excursions, the number of times crews have to visit new sites has reduced over the years, he noted.

Boyle’s living accommodations are shown in the film, as well as a movie locker with hundreds of titles.

On cargo ships, entertainment choices for the ship’s crew of 20 to 25 persons are limited. Workers’ time off might include a combination of movies and games, as well as exercise time, according to Boyle.

The officers’ lounge, which includes a pingpong table and TV, and the general crew’s lounge, which contains a poker table, are both shown in the video. Crew members were considerably more restricted in their activities onboard during the pandemic, according to Boyle.

“Many ships were not allowed to eat with fellow crewmates or go to the gym,” Boyle told Insider. “You were only allowed in your room or work area.”

The film also shows how a mix of old and new technology keeps the supply chain going, with engine control rooms that appear as they belong on a spaceship and a giant gyrocompass.

The navigation bridge also gives the captain and officers an unrestricted view of the waters ahead and serves as a command center for the vessel’s activities.

The ship is equipped with a huge gyrocompass that aids in navigation.

In 1908, the first seaworthy gyrocompass was created. It’s a nonmagnetic compass that uses a fast-spinning disc and the Earth’s rotation to determine geographic direction.

The movie depicts the engine room and the combustion engine that aids in the propulsion of a massive propeller.
As per Businessinsider, Boyle also takes viewers on a tour of the ship’s exterior, labeling specific components and even touring the ship’s lifeboat.

The movie concludes with a view of the ship approaching a German pier.