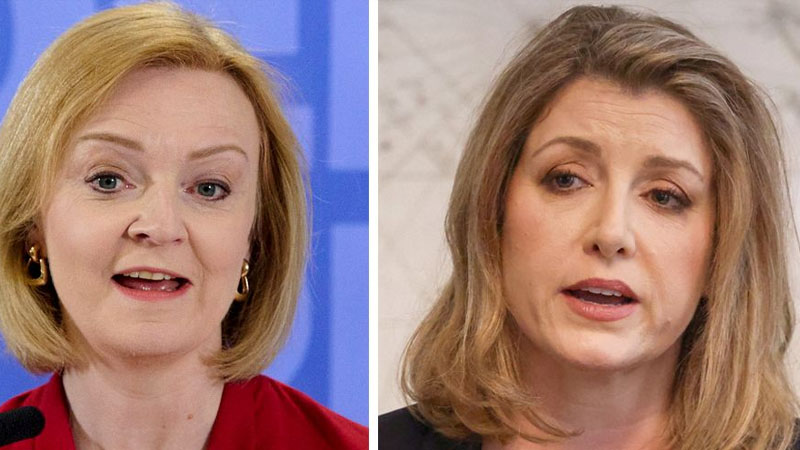 One of them will face Rishi Sunak in the final run-off.

In the race to succeed Rishi Sunak as the next Tory leader and prime minister, Penny Mordaunt and Liz Truss are making one last push for support.

Today between 1 and 3 p.m., Conservative MPs will cast their votes for the candidates they want to compete in the final run-off. The outcome will be made public at 4 p.m.

Yesterday, Kemi Badenoch became the most recent candidate to be removed, leaving Sunak, Mordaunt, and Truss vying for the final two positions.

With Mordaunt and Truss receiving 92 and 86 votes, respectively, and Sunak receiving 118 votes, Sunak’s place in the final two was all but assured.

Much will depend on where Badenoch’s 59 supporters go in today’s round, but one Mordaunt supporter told HuffPost UK: “It will be a close result.”

Since many of Badenoch’s supporters are on the right of the party, it is expected in Westminster that most of them will support Truss rather, increasing the likelihood that she will succeed Mordaunt in her position.

One former cabinet minister said: “Team Penny is working hard. Kemi’s supporters were a pretty eclectic bunch so maybe there is one last surprise in this race yet – but I’m not betting on it.”

A Mordaunt campaign source made a direct attack on Truss, claiming that if she were to take the lead, she would lose the upcoming general election.

“Today is about continuity versus change for the Conservative Party,” the source said.

“Penny’s been speaking with colleagues already this morning and so many of Tom [Tugendhat] and Kemi’s backers are calling out for change. As the only one not in Johnson’s cabinet, Penny is the sole MP left in the race who offers the party and country a genuine fresh start.

“MPs, party members, and voters across the country are crying out for something new but only Penny Mordaunt can deliver that.

“Liz Truss will not be able to win a general election and would put MPs’ seats at risk.”

Treasury secretary Simon Clarke, who is backing Truss, told Sky News: “Liz is within touching distance of those final two spots, at which point this reverts to the membership of the Conservative Party to choose our next prime minister.”

Asked whether he believed Sunak supporters could lend their votes to Mordaunt in a bid to scupper Truss’s chances, he said: “I’ve no insight into any of this. My only goal is to make sure that the best candidate goes forward to the members and in my view that’s Liz.

“We have been purely focused on making the best case to our colleagues and we want to continue that hard work into today to make sure Liz makes it into those final two slots and gets to make her case to the membership.”

He added: “All I’m focused on today is to make sure we make the case to as many colleagues as possible that if they want a robust plan for economic growth if they want increased defense spending if they want clear action on the climate then they should be voting for Liz.”