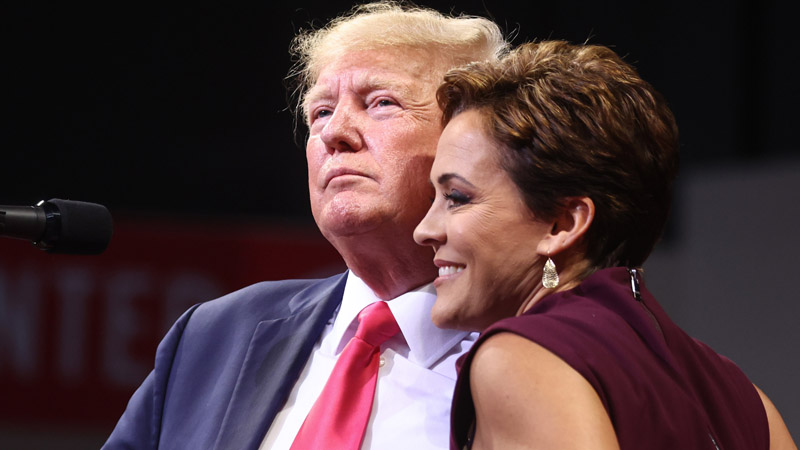 During an appearance on Real America on the One America News Network (OANN), attorney Christina Bobb made the statements while addressing Lake’s legal attempts to have the Arizona governor race, which she lost to Democratic Katie Hobbs, thrown out.

Lake, a Trump supporter who believes the 2020 election was rigged due to massive voter fraud, filed a lawsuit on December 9 stating that “hundreds of thousands” of ballots were “infected” in Maricopa County.

Lake is also challenging the certification of the midterm voting results and is asking a court to declare her the winner of the campaign.

During a debate of the case, OANN anchor Dan Ball questioned Bobb whether, if Lake wins and shows that Arizona’s elections are “screwed,” Trump might also show that he was “screwed” out of the election he lost more than two years ago.

“Well, it’ll be interesting,” Bobb, herself a former OANN host, replied. “You know, I don’t know. I mean one state as we know. We would need three states, so I wouldn’t necessarily say right away, but certainly maybe down the road.

“But I would expect the governor Lake to clean up the process,” Bobb added.

Lake is seeking a judge to proclaim her the winner of the Arizona governor race or to conduct a vote recount in Maricopa County.

During the meeting, Judge Peter Thompson set a deadline of 9 a.m. on Monday, December 19, for the defendants in the court case County election officials, and Hobbs to file motions to dismiss the case, which the plaintiffs’ counsel confirmed they would do.

In a statement after the court hearing, Lake said: “Today’s hearing regarding my lawsuit was telling. The judge noted the volume of evidence my team compiled. The defendants’ team seemed desperate to sweep it under the rug.

“I am thankful to Judge Peter Thompson and his team for the work they do and we are confident that given the opportunity, we will expose this election for the sham it was.”

Hobbs’ campaign manager Nicole DeMont referred to Lake’s complaint as a “nuisance” in a statement the day after she filed her claim.

“Kari Lake needs attention like a fish needs water,” DeMont added. “Independent experts and local election officials of both parties have made clear that this was a safe, secure, and fair election.”

Lake had one election case dismissed by an Arizona judge and then had her lawyers sanctioned after U.S. District Court Judge John Tuchi intended to discourage others from filing “similarly baseless suits” in the future.

Kanye West’s ‘Final Message’ To Kim Kardashian: ‘Don’t Let The Devil Use You’