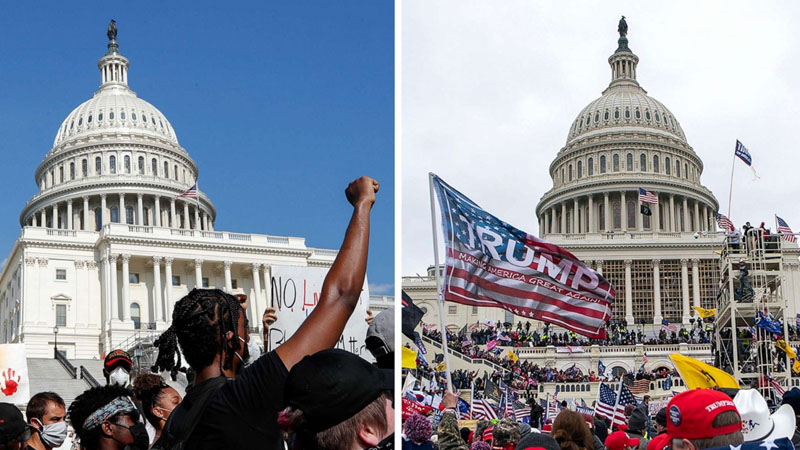 According to reports, the alleged mass shooter who terrorized a Fourth of July parade and killed at least six people has a lengthy social media history that paints him as a radicalized Antifa activist and potential false flag plant to support the leftist thesis that conservatives are dangerous homegrown terrorists.

Police detained 22-year-old Robert E. Crimo III on Monday night as a person of interest in the mass shooting that claimed at least six lives and injured scores at a July Fourth parade in Highland Park, Illinois, following a tense manhunt carried out by several law enforcement agencies.

According to Crimo’s reported social media history, “Awake the Rapper,” a radical Antifa activist on a terrifying mission, posted a ton of images and sentiments.

One tweet that has since been deleted and locked showed a person who appeared to be Crimo acting out a mass shooting while dressed out in Antifa Black Bloc garb and tattoos. Crimo appears to be reading a strange poem about himself as “a sleepwalker” who “can’t be stopped” in another post found by the Post Millennial.

Other posts linking Crimo to Antifa quickly emerged, depicting him as a disturbed person brainwashed by a radical far-left philosophy.

A counter-campaign was started in an attempt to connect Crimo to former President Donald Trump as a narrative that was developing in opposition to what leftists anticipated and desired.

Crimo reportedly attended a Trump rally in a few of his posts, and other users said that his father was a Trump supporter who ran for mayor of the affluent Chicago neighborhood of Highland Park.

That’s all it took for an eager mainstream media to pounce on fresh MAGA meat.

“Crime didn’t frequently post about major political figures on his websites, except for two posts about former President Donald Trump,” reported NBC News, also noting the posts that showed Crime “draped in a Trump flag” that was captioned “spam” and another of him dressed in a Waldo outfit at a Trump rally.

Many people saw a startling connection between those isolated remarks and previous attempts to link radical leftists and activist groups like Antifa to conservatives by planting false flags at events.

Another scrolling post was full of Crime tweets that “liked” extreme-leftist remarks calling for everything from Trump’s arrest to the expulsion of J6 protesters, to roasting pro-MAGA Rep. Marjorie Taylor Greene, R-Ga., and criticizing Dave Chappelle for his transgender jokes.

Crime had not been charged for the mass shooting as of early Tuesday morning, but police said “calling a person a suspect or a person of interest amounts to the same thing,” reported CNN.

“This individual is believed to have been responsible for what happened and the investigation will continue,” said Lake County Major Crime Task Force spokesperson Christopher Covelli.

Travis Barker Receives Flowers from Kris Jenner and Corey Gamble After Hospitalization: “Get well soon!!!! We love you”

Indian man attempted to smuggle gold Under His Wig and In His Rectum: POLICE