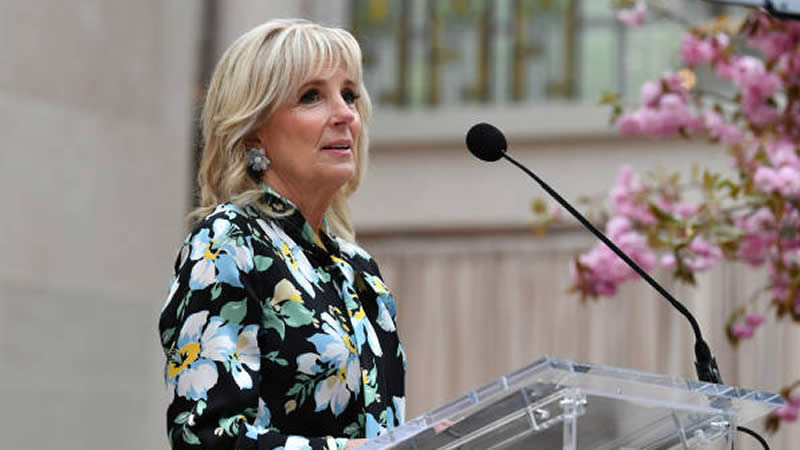 Conservative Hispanics are mocking first lady Jill Biden in advance of her keynote address at a “Latinx IncluXion Luncheon” in San Antonio on Monday.

According to the event website, the luncheon, which is a part of the 2022 UnidosUS Annual Conference, gives attendees “the opportunity to learn about and collaborate on issues ranging from housing to health, racial equity to education, diversity, and inclusion to owning our narrative as a community.”

Following Jill Biden’s remarks at the Latinx IncluXion Luncheon at 1 PM, a panel discussion titled “A Powerful Case for Equity” with two members of the Biden administration and Republican Governor of Arkansas Asa Hutchinson will take place.

“Equity in education is the foundation for equity in every other sector,” the panel description reads. “As the pandemic and the Uvalde massacre have underscored the need for culturally and linguistically competent health responses, the nation’s leaders join us to chart the path forward for Latino children and families.”

“It was an honor to spread the conservative message in the Latino community at Unidos in San Antonio today,” Hutchinson said in a statement provided to Fox News Digital. “We discussed border security, the rule of law, and strengthening our education system. I appreciate these hardworking leaders who contribute to the American Story.”

The office of Jill Biden did not reply to a request for comment from Fox News Digital.

Republican Cassy Garcia, a Hispanic seeking to unseat Democratic Rep. Henry Cuellar in Texas, connected Jill Biden’s attendance at the event with the border issue, where an unprecedented number of undocumented immigrants are flooding in.

Carolina Amnesty, a Hispanic Republican running for the Florida House of Representatives, tweeted: “Everyone knows that not a single Hispanic uses ‘Latinx.’ The reason why woke corporations and Democrats keep imposing it on us is to control how we think about gender, and thus, how we vote. Unfortunately for them, we believe in God, Family, and Freedom — not MarXism.”

Rep. Mayra Flores, R-Texas, responded with a.gif of a previous Jill Biden speech in which the first lady mispronounced “si se Puede,” or “yes we can.”

As per Foxnews, Jill Biden urged Congress to codify Roe v. Wade and enact a nationwide ban on assault weapons and high-capacity magazines during her remarks.

“We will never make the changes we need when so many of our leaders refuse to work together,” she said. “When politicians block legislation that the majority of Americans want – a ban on guns that only belong on the battlefield, the right to make our own decisions about our own bodies, universal childcare and community college, and ending child poverty.

Congress is supposed to represent the will of the people, and that’s why we the people need to speak up. All of us united. We need to vote in races at every single level.” Due to the COVID-19 outbreak, the three-day UnidosUS conference is gathering in person for the first time in two years at the Grand Hyatt on the San Antonio River Walk, according to KSAT 12.

The National Parents and Families Engagement Council, recently established by the Department of Education to find “constructive ways to help families engage at the local level,” was announced by the department on June 14. UnidosUS, which has expressed support for the Black Lives Matter movement, is a member of the council. Parents’ rights organizations are suing the council, along with the Education Department and its secretary, Miguel Cardona, on the grounds that the council is politically biased and in violation of federal law.

Raul Yzaguirre, the former CEO of Unidos, received the Presidential Medal of Freedom last week from President Biden. Jill Biden’s attendance at the UnidosUS event coincides with a shift in the party’s favor among Hispanic voters, who have historically supported Democrats. According to a Quinnipiac University survey conducted in May, President Biden’s standing with Hispanic Americans has plummeted to 26%, compared to 55% the year prior.

One 2021 poll found that only 2% of Hispanic voters use the term “Latinx,” indicating that Latinos themselves have vehemently rejected it. According to the survey, 40% of participants stated they find the term “Latinx” offensive, and 30% said they would be less likely to support a politician who used the term.

The term “Hispanic” led the way among those voters, with 68% saying they prefer it.