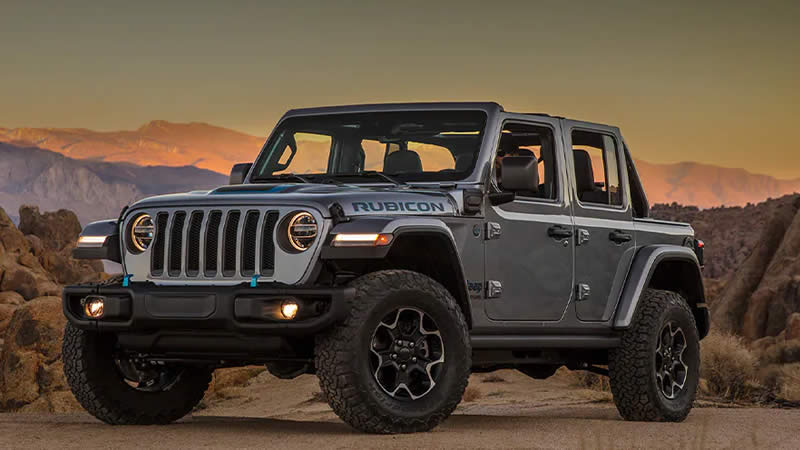 When things calmed down after the sixth Rebelle Rally, the Jeep SUVs remained in the lead by an overwhelming majority. The 2021 Jeep Wrangler 4xe is the first electric vehicle to complete the 1,500-mile hike through the deserts of Nevada and California, finishing in both first and second place, overall victory, and the Bone Stock Award. In addition, the Jeep Wrangler swept the podium and secured the first three places and five of the top 10 places.

“The Jeep brand continues to dominate for a reason,” said Emily Miller, founder – Rebelle Rally. “Off the showroom floor, a Jeep 4×4 is an exceptionally capable vehicle to take on the Rebelle Rally. The Wrangler 4xe definitely proved itself in an impressive way, taking the top two positions in the overall competition.”

Team 4xEventure (Team 129) and Jeep Wrangler Rubicon 4xe, consisting of Nena Barlow and Teralin Petereit, took overall victory and the Bone Stock Award at this year’s Rebelle Rally. The team’s Wrangler Rubicon 4xe was also the electric vehicle with the most points. Barlow and Petereit consistently dominated and scored the most points in four of the seven stages, never below third place. This is Petery’s third overall victory, while he took the podium in his other two-year competition, making him the most successful participant in the Rebelle Rally.

“The course was more challenging than ever this year, but Wrangler 4xe made it easy,” said Nena Barlow of Team 4xEventure. “We turned dunes and rocky mountains and washed them with ease and efficiency. Not to mention we never lacked range or performance.”

Team Jeep Thrills (Team 177) took a strong second place. The mother-daughter team of Christine and Emily Benzie and the Jeep Wrangler Rubicon 4xe 2021 took a stage win and never made it into the top 10. This is their third Rebelle podium with a victory in the Bone Stock category and their first podium all in all.

“The Rubicon 4xe was pure pleasure to drive during the Rally,” said Emily Benzie of Team Jeep Thrills. “The suspension smoothed the many whoops and washouts we encountered in the Nevada and California deserts. On the third day of the competition, we opened the Sky One-Touch Power-Top, without having to stop the Jeep, to admire the steep cliff faces of the scenic Titus Canyon in Death Valley, and then closed it as a dust storm began to form on the valley floor. On the last afternoon, the added torque from the Rubicon 4xe electric mode combined with the eight-speed transmission created the perfect machine to tackle the soft sand in the large dunes of the Glamis sand dune complex.“

Jeep has proudly teamed up with Shandiina Peters and Racquel Blacks Team Asdzáá Skoden Rebelles (Team 160), the first all-Navajo team to compete in the rally. As Rebelle Rally rookies, they drove their Jeep Wrangler Rubicon 4xe for a respectable finish in 29th place.

“Participating in the Rebelle Rally this year was definitely an unforgettable experience,” said Racquel Black of Team Asdzáá Skoden Rebelles. “Our opportunity and success at the rally came to fruition because of the Jeep brand’s amazing sponsorship of the beautiful and powerful plug-in hybrid Wrangler Rubicon 4xe!”

The Bone Stock designation requires vehicles to be delivered as supplied by the manufacturer with clearance only for factory-sized aftermarket tires and wheels. The Electric Designation introduced last year applies to EVs, PHEVs, and hybrid vehicles.

“The Jeep brand has supported Rebelle Rally since it was founded six years ago, and this year we were excited to showcase the new Wrangler 4xe in the toughest off-road rallying conditions,” said Jim Morrison, Vice President Jeep Brand North. America. “It is proof of our racing teams and our engineering teams at home that the Jeep Wrangler took the podium this year, the two Wrangler 4xe SUVs took first and second places in the overall standings, as well as the Bone Stock and Electric awards without a single The entire rally. This year. Congratulations to everyone who rallies. “

As the Jeep brand nears its ultimate goal of zero emissions, events like the Rebelle Rally are key to demonstrating and showcasing both the industry’s best 4×4 capabilities and their class-exclusive off-road 4xe engine. The Jeep Wrangler 4xe offers 49 MPGe and 21 miles of all-electric range with no range concerns.

The drive system of the Jeep Wrangler 4xe combines two electric motors, a 2.0-liter I-4 engine, and an eight-speed automatic transmission for almost silent propulsion and improved 4×4 off-road capability with no concerns about EV range. This arrangement allows the Trail Rated Jeep Wrangler 4xe to retain its undercarriage, which includes solid front and rear axles, a full-time two-speed transfer case, fully articulated suspension, and a 30-inch water passage.

With the E-Selec modes, the driver can adjust the Jeep Wrangler 4xe drive individually to the journey: hybrid, electric, and eSave, which means that the battery charge is retained for later use. The 17-kilowatt-hour battery of the Wrangler 4xe charges household electricity in around two hours at level 2 (220 volts) and around 12 hours at level 1 (110 volts).

The Rebelle Rally is the longest competitive off-road rally in the United States. On more than 2,500 kilometers through the iconic terrain of Nevada and California, this is an endurance competition for women that is not the fastest, but precise driving and navigation. With maps, compass, road books, and strategy, the Rebelle format, the competition is innovative and unique. GPS and other electronic devices are strictly prohibited.