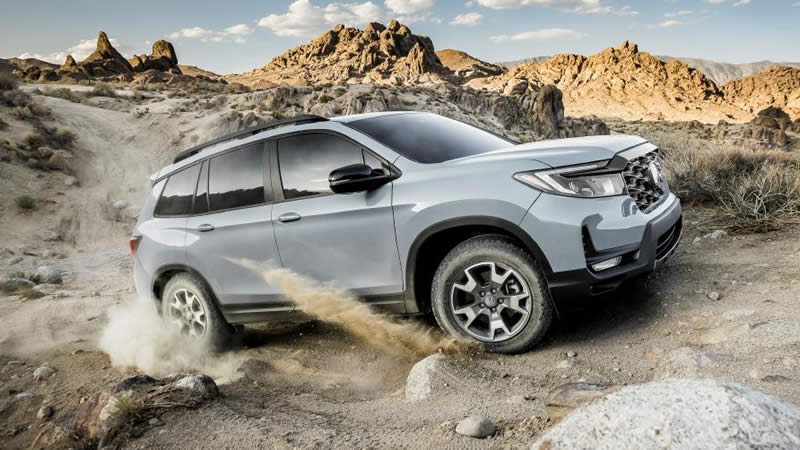 Honda presented the 2022 Passport Stage rally truck, which was specially built for the competition by the Honda Performance Development (HPD) Maxxis rally racing team. It underlines the robustness and durability of the light Honda trucks.

The rally truck showcased the rugged new design of the 2022 Passport and debuted at the Lake Superior Performance Rally (LSPR) in Michigan on October 15-16. The American Rally Association (ARA) series will compete in indoor rally events in the Limited 4WD class throughout the 2022 season.

As a prime example of the Honda “Spirit of Racing”, the HPD Maxxis Rally Racing Team consists of Honda partners in the company’s Auto Development Center in Ohio. The team is a subsidiary of the larger Honda of America Racing Team (HART), which is made up of partners from development and production facilities in North America.

The ARA’s national and regional championship series compete intensively on hundreds of kilometers of track, with modified road vehicles reaching speeds of over 160 miles per hour on covered natural tracks with gravel, dirt, mud, and snow. In the LSPR race, the Honda Passport rally truck was used and shared at the same facility by Honda engineer Chris Sladek, a chassis test engineer at the company’s North American Auto Development Center in Ohio.

Incredibly, Passport’s come with a stock 3.5-liter i-VTEC V6, 9-speed automatic transmission with paddle shifters, an intelligent all-wheel-drive system with variable torque (i-VTM4 ), and all suspension components which remain unchanged for the competition.

The only addition is the automatic transmission fluid cooler in Passport’s existing tractor package. The driver uses sequential mode and the paddle shifters of the transmission for improved control, and the Passport’s Intelligent Traction Management system’s sand mode is used for optimal torque distribution and performance on loose surfaces.

“The fact that we didn’t have to make any changes to the drivetrain or suspension of the 2022 Honda Passport for this tough terrain and tough competition says a lot about the capabilities and performance that come standard with the Passport,” said Honda engineer and Rally racing driver Chris Sladek.

To reduce weight, the rear seats, carpets, soundproofing, and other interior trim pieces have been removed, and the SUV’s side and rear windows have been replaced with Lexan polycarbonate. A hydraulic handbrake lever improves maneuverability in tight turns, while a modified exhaust creates a signature rally-inspired sound. The exterior graphics of the Passport, designed by HPD, underline the robust and adventurous flair of the Honda Passport.

At the Lake Superior Performance Rally 2021 on October 15 and 16, the team competed in the ARA East Regional Series. The first day of the competition consisted of fast stages with flowing curves and lasted until late at night when the additional light bar of the Passport was crucial to keep the speed in the jungle. The team was consistently in the top 10 of 42 regional competitors, but a tire detachment held the team back on Stage 3, causing them to finish more than 9 minutes later than expected for Stage 3.

The team finished 22nd out of 42 regional participants and 4th out of 6 participants in the Limited 4WD class.

The LSPR 2021 is the third stage of the rally in which the team will compete in the Honda Passport. During the 2019 Southern Ohio Forest Rally (SOFR), their first event as part of the ARA East Region series, the team finished 2nd in the Limited 4WD class and 12th out of 75 participants.