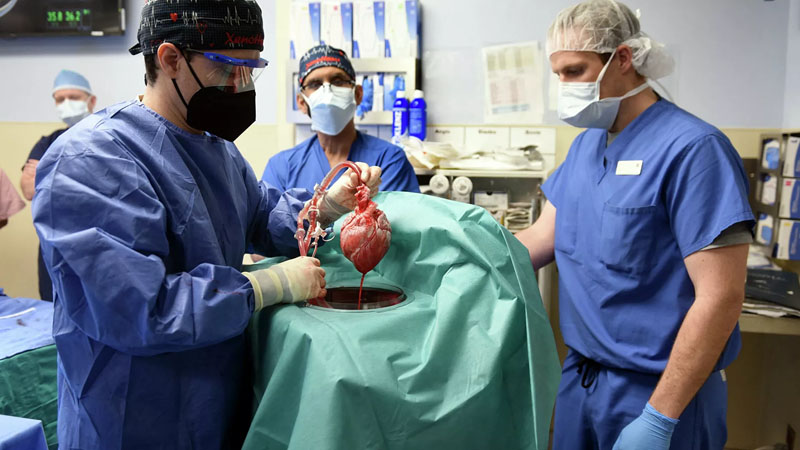 Earlier this month, surgeons in Maryland successfully transplanted a genetically engineered pig heart into a human patient, making it the first of its type, and thus feeding hopes for the expanding possibilities of xenotransplantation as a result. The 57-year-old patient is reportedly doing well and still recovering.

According to the report, Dr. Muhammad Mohiuddin, the University of Maryland Medical Center’s director of xenotransplantation, which is the procedure of putting an animal organ into a human body, said that before arriving at the US, the heart was produced by the Revivicor lab company, altered so that its DNA would be more amenable to a human host, and then fortified with the drug by Swedish medical tech company XVIVO.

The use of the drug is explained by the fact that transplant organs are usually obtained from much closer distances since they deteriorate in viability quickly once outside the body.

And cocaine was mixed with other hormones, such as cortisol and adrenaline, about ten of them in total, to keep the live tissue from spoiling during the long journey to Maryland for up to 24 hours, but the proprietary solution raised red flags with DEA officials in the US, where cocaine had never been used in this setting before.

“The cocaine name pops out because everybody thinks, ’Oh my God, what is cocaine doing in here?’” the doctor is quoted as saying.

Nevertheless, the cocaine was imported for use in the surgery after a protracted permit application process with the anti-drug agency.

“It’s a bit of a hassle but it’s a routine procedure when importing controlled substances,” Mohiuddin said.

The mechanisms behind the drug’s efficacy with the hormones are reportedly unknown to medical researchers, but Mohiuddin was not concerned with the “why” at the time because the cocaine and hormone blend had outperformed the alternatives.

The doctor also suggested that the cocaine-laced mix be used widely in other transplant procedures around the country.

“It will be a great advance if this process is approved by the regulatory agencies here also, as we cannot get hearts usually within the span of two to three hours,” he noted. “This will allow us to get hearts from other states.”

The transplant has opened up life-saving possibilities for thousands on national organ transplant lists in the United States, which is experiencing an extreme organ scarcity crisis, according to Mohiuddin.

“Almost 150,000 people lose their lives a year just in the US. You can calculate how many more throughout the world lose their lives just because organs are not available,” the surgeon explained. “If this technique is successful, we will be able to save almost all of them.”

And given the recent success, doctors in the US are now hoping to see more of the notorious party drug in transplant centers. Last week it was revealed that surgeons in the US state of Alabama successfully transplanted the kidneys of a pig into the body of a brain-dead man donated by his family, in a test run for a surgery they aim to execute on living humans later this year.