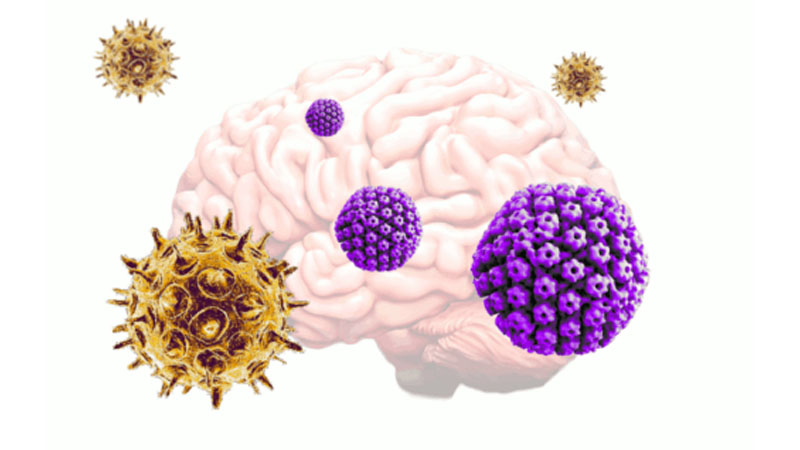 A fascinating new collaborative study conducted by researchers at the University of Oxford and Tufts University has discovered that two common viruses may be working together to trigger the early stages of Alzheimer’s disease. The discoveries add to a growing body of evidence linking the herpes virus to neurodegenerative disease.

For more than a half-century, scientists have discussed whether microbial infections are a cause of neurodegenerative disease. A number of studies in the 1980s found links between the onset of Alzheimer’s disease and herpes simplex viral infections, but it was not clear how this common virus could be influencing neurodegeneration.

A vital 2020 study led by a Tufts University team demonstrated how a herpes infection can cause several pathological features of Alzheimer’s disease. The researchers used a novel 3D bioengineered brain model in which neural stem cells were populated in a sponge-like structure and coaxed into a variety of brain cells.

This type of brain tissue model was extremely novel, and the findings were the first to demonstrate explicitly how a common viral infection can lead to pathological signs of Alzheimer’s disease. However, a major question hung over the findings. Given that more than two-thirds of the world’s population is infected with herpes simplex virus type I (HSV-1), there must be other factors that reactivate the dormant virus and set off the chain reaction that leads to Alzheimer’s.

This new study focused on another common virus linked to Alzheimer’s disease: varicella-zoster virus (VZV). This virus is responsible for chicken pox and, later in life, shingles. Using the 3D bioengineered brain model, the researchers investigated whether VZV infection affects brain cells that have already been seeded with the dormant herpesvirus.

Surprisingly, the scientists found that exposing brain cells harboring dormant HSV-1 to VZV caused the herpesvirus to reactivate and a cascade of the toxic plaques known to be signs of Alzheimer’s. However, when brain cells were exposed to VZV in the absence of herpesvirus, none of these Alzheimer’s symptoms emerged.

“It’s a one-two punch of two viruses that are very common and usually harmless, but the lab studies suggest that if a new exposure to VZV wakes up dormant HSV-1, they could cause trouble,” said Dana Cairns, a researcher working on the project.

“It’s still possible that other infections and other pathways of cause and effect could lead to Alzheimer’s disease, and risk factors such as head trauma, obesity, or alcohol consumption suggest they may intersect at the re-emergence of HSV in the brain,” added Cairns.

The study also speculates potential future Alzheimer’s problems that may arise from the COVID-19 pandemic as SARS-CoV-2 infections have been known to reactivate dormant VSV and HSV-1 infections. It has been suggested the pandemic could increase future rates of neurodegenerative disease and the researchers behind this new study urge clinicians to keep a watchful eye on elderly patients over the coming years.