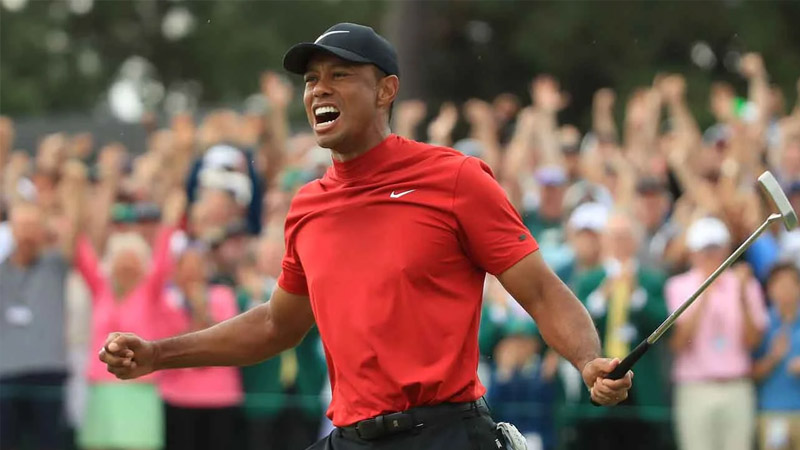 Tiger Woods showed everyone on Monday that he’s doing much better in his recovery after his February car accident, and he’s helping another fan with her battle along the way. A sweet photo was shared on Luna Belle Perrone’s Instagram page with the golfer after running into him over the weekend on the soccer field.

Luna, who is fighting Ewing’s Sarcoma, a rare bone cancer, approached Woods while he was watching daughter Sam, 13, play soccer. Her mom, Hailey Perrone, told E! News that the athlete was “very nice and encouraging” and had some advice for Luna as she continues her cancer treatment. “He told her to stay strong and she told him to stay strong, too,” she said.

The image Luna posted shows Woods look happy and healthy, other than the crutches and compression hose over his right leg, which was severely injured in the crash. The February 23 accident was the result of the five-time Masters Tournament winner accidentally hitting the gas pedal as he navigated a tough corner and wound up going 83 miles in a 45 mile per hour zone. Los Angeles County Sheriff Alex Villanueva revealed on April 7 that “there were no citations issued and no signs of impairment” in the incident.

Woods shared a photo in late April with a brace on his right foot and his dog, Bugs, loyally standing by him as he updated his fans on his progress. “My course is coming along faster than I am 😃,” he captioned the photo. “But it’s nice to have a faithful rehab partner, man’s best friend.”

There’s been no word if he will ever be able to return to the professional golf world after his serious injuries, but it looks like his spirits are up after the terrifying crash earlier this year.

Bobby Bowden Names The Toughest Coach He Ever Faced

Trevor Lawrence Is Having A Tough Day At Jaguars Practice