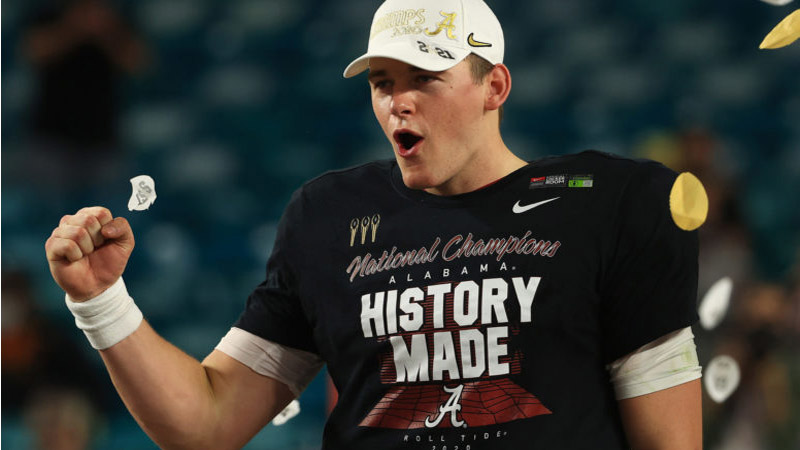 Mac Jones revealed that Cam Newton has already anointed him with a brand new nickname to welcome him to the NFL. The New England Patriots 2021 first round pick will now officially be known as “Mac and Cheese.”

Well, at least to Newton.

Jones shared his new moniker when meeting with the media on Thursday. Although he previously earned himself the nickname “Joker” while at Alabama, the rookie quarterback seemed eager to embrace Newton’s new one.

Obviously, the name Mac opens up a world of nickname possibilities, so “Mac and Cheese” leaves a little something to be desired. NFL fans were largely in agreement that Newton could’ve worked on a more creative option, but still had fun with the new way to reference the Patriots rookie quarterback.

Newton is somewhat well-known for giving out nicknames to his teammates and has already done so for many other Patriots players. Thankfully, ESPN’s Mike Reiss is keeping a list.

If the Patriots can take anything away from Jones’ new nickname, it’s that he’s started to build a relationship with Newton. The two will be competing for the starting job this offseason, but seem to have started a collaborative partnership, rather than a contentious rivalry.

Jones already has hefty expectations to live up after becoming the highest quarterback selected by the Patriots since Drew Bledsoe. After a dominant 2020 at Alabama, the rookie will want to carry momentum into his first year in the NFL.

However, it might be beneficial for Jones to learn behind a veteran quarterback like Newton. The two have drastically different playing styles on the field, but the 2015 NFL MVP might be able to teach the Patriots rookie a thing or two about playing in the pros.

With over three months to go until the start of the regular season, Bill Belichick’s starter remains largely unknown. Fans will have to wait until Week 1 on Sept. 12 to see which quarterback takes the field: Superman or Mac and Cheese.

Simon Cowell plans charity walk after recovering from back injury