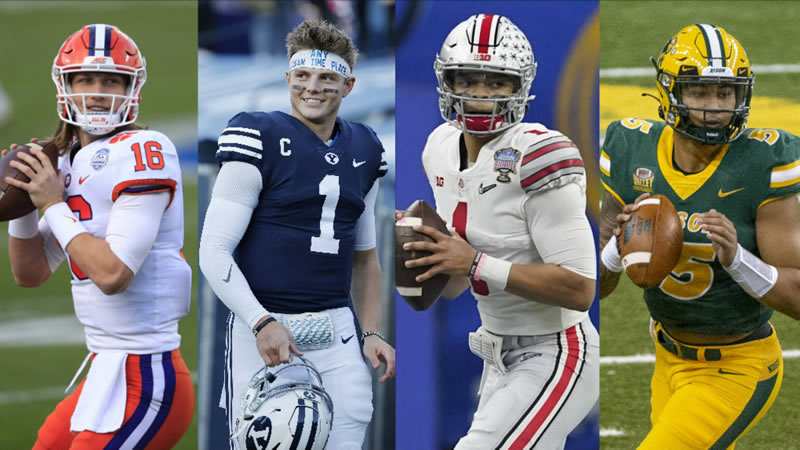 The 2021 NFL Draft begins April 29, and while the draft is always a landmark day for the league and its 32 talent-obsessed franchises, this year’s event has a little extra juice. The reason? The 2021 draft class is loaded with prospects at the most important position in the sport: quarterback.

It’s impossible to build a successful NFL team without an above-average quarterback. In the 21st century, Super Bowl victories have almost always gone to teams with one of the top passers in the league. QBs have always been vital, but they’ve only grown more critical as the NFL has shifted from running the ball to throwing it. In 2000, the average NFL team threw for 207 yards per game. In 2020, it threw for 240, and teams also threw more touchdowns and completed a higher percentage of their passes. Put simply, talented QBs are the most valuable assets in today’s NFL—and possibly in all of American sports.

The 2021 draft includes one QB, Clemson’s Trevor Lawrence, who’s widely believed to be the best draft prospect in a long time (exactly how long is up for discussion). This year’s draft also includes four more stellar passers who are likely to get picked in the first round.

Below, I’ve made a case for why each of them could become NFL stars and listed them in the order in which I would pick them, if I had the chance.

The Jaguars are going to pick Lawrence first overall, as they should, and he will go on to a Pro Bowl career if he stays healthy. He’s so talented that even a cursed franchise like Jacksonville can’t mess this up.

The wild thing about all that? Fields doesn’t even run that much. He can roam outside the pocket and torch defenses with his legs, but his most important trait is his cannon arm. Fields throws hard and places the ball accurately. Some evaluators have criticized his ability to see the field (no pun intended), but detailed study of his game tape suggests that criticism is misplaced. His physical talent is immense, and he had a great handle on the Buckeyes’ offense during his time in Columbus. If he stays healthy, he’ll be a great NFL player.

Those aren’t unreasonable concerns, but Wilson still has a chance to be an excellent NFL quarterback. His arm is almost shockingly good, and so is his core strength. Wilson can throw on the run, from a position where no QB should be able to get much power on a pass, and fire a laser 60 yards downfield. He’s one of the most exciting throwers to come through the draft in years, and if his new team gives him adequate protection, his talent should shine through.

Lance is a terrific athlete, and unlike Fields, he seems to actively seek out opportunities to run the ball and bowl into defenders. His arm is solid, and an NFL team that uses him correctly—presenting him with chances to tote the ball himself as well as launch it through the air—might find themselves with one of the best players in the league.

The reason he’s last on this list: It’s unclear what Jones will do when he’s not part of an unstoppable offense with a major talent advantage on every opponent. At Bama, he could throw the ball to Heisman Trophy winner DeVonta Smith and hand it off to potential first-round running back Najee Harris. He could stand comfortably behind a dominant offensive line. Jones is a competent and capable QB, but he nonetheless feels like a bit of a dice roll in the first round.