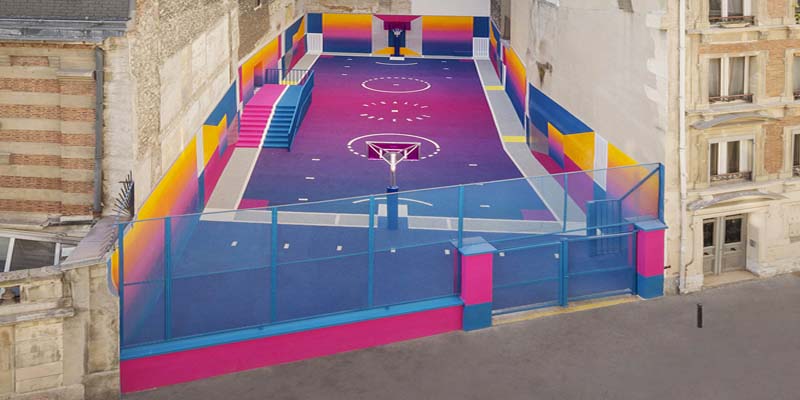 French design and photography agency Ill-Studio and fashion brand Pigalle have redesigned and repainted the Paris Duperré basketball court, with support from Nike. The court is squeezed between buildings in a Parisian suburb on Rue Duperré, and became internationally renowned in its previous guise, painted in graphical blocks of primary colours.

First decorated in 2009 by Nike and Pigalle founder Stephane Ashpool, the same year Pigalle launched, the court has been redesigned and redecorated multiple times, working with Ill-Studio since 2014. The Pigalle logo, designed by Ill-Studio, is emblazoned at the centre of the court, honouring Stephane’s training with local kids.

The most recent design unveiled yesterday on Instagram shows the court has been painted in gradated hues of fuschia, dark blue, canary yellow and burnt orange. Ill-Studio says in the post: “From us to the youth… Ill-Studio & Pigalle with the precious support of Nike.