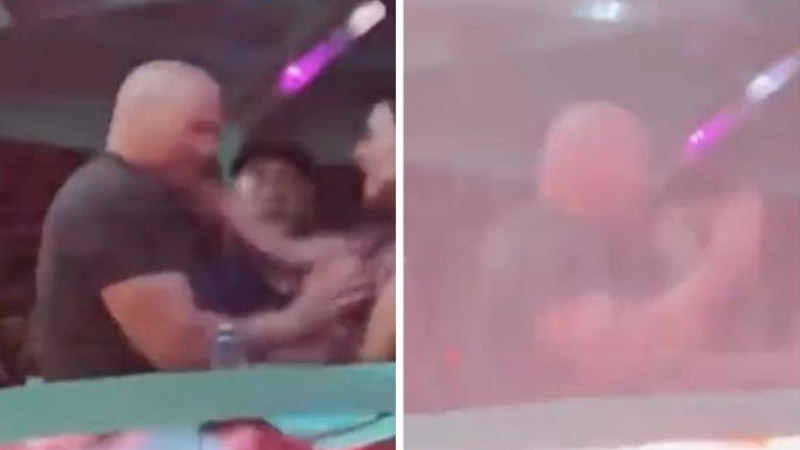 Dana White, the CEO of the UFC, has admitted to being embarrassed after slapping his wife during an altercation in Mexico on New Year’s Eve.

White and his wife Anne, with whom he has three children, were partying in Cabo San Lucas when they began to argue. Mrs. White is seen covering her face before her husband grabs her wrists in the video, which was later released to TMZ. Mrs. White reacts by slapping her other half before he does the same.

White later told TMZ: “My wife and I were out on New Year’s Eve Saturday night, and that’s exactly what happened. You’ve heard me say for years that there’s never, ever an excuse for a guy to put his hands on a woman, and now I’m on TMZ talking about it. My wife and I have been married for nearly 30 years and have known each other since we were 12 years old.”

“We have three children, and we have obviously shown the video to them since it appeared. Right now, we’re more concerned with our family. People will have opinions on this, and most of them will be correct, especially in my case. You never put your hands on a woman. My wife and I have been together for a long time and we actually love each other. We’ve known each other since we were very young, and this is just another unfortunate event.”

White has been the president of the UFC since 2001 when he was appointed following a buy-out from Lorenzo and Frank Fertitta. The promotion has long since established itself as the biggest of its kind in the world and boasts Conor McGregor as its biggest star.

White met his wife at school, and the couple married in 1995. They have two sons, Aidan and Dana, and a daughter, Savannah, and Anne, unlike her husband, avoid the media spotlight.

“There was definitely a lot of alcohol involved, but that’s no excuse,” White continued. I’m not going to make any excuses for this. Nothing like this has ever happened before. It’s the first time this has ever happened, and people will say whatever they want. It is what it is, and whatever people say about it is justified. I’ve received it. It happened. I’m not sure why it happened.

“My wife and I have both apologized to one another. We’ve apologized to our children, and this is one of those things where everyone will have a viewpoint. I couldn’t care less what anyone else thinks. Right now, we’re more concerned with our children and taking care of our families. That was both the beginning and the end of it. We’re still on holiday. We’re obviously best friends, she’s my wife, and we did drink too much that night, so whatever happened happened. That was the end of it.”

White’s wife also revealed to TMZ: “Dana and I have been married for almost three decades. This is completely out of character for him; nothing like this has ever happened before. Unfortunately, we were both drinking excessively on New Year’s Eve, and things quickly spiraled on both sides. We discussed it as a family and apologized to each other. I just hope that for the sake of our children, people will respect our privacy.”