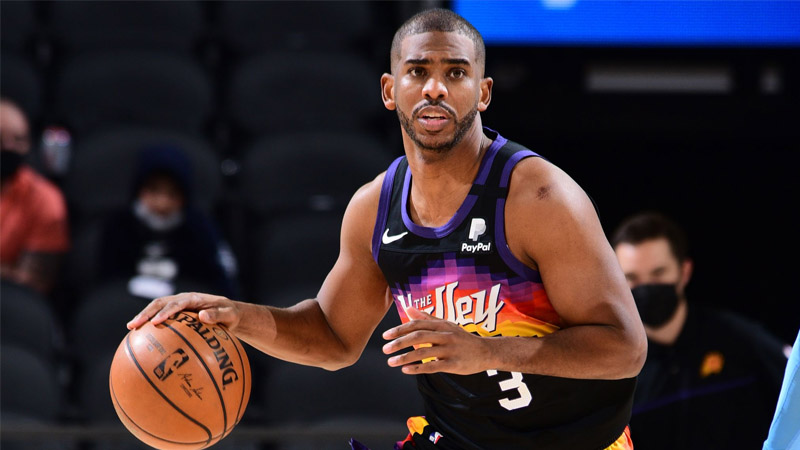 Chris Paul and the Phoenix Suns are looking to close out the defending champion Los Angeles Lakers in Game 6 of their first round NBA Playoff series Thursday evening.

Fresh off a tremendous initial regular season with the Suns after being acquired from the Oklahoma City Thunder, the 36-year-old Paul has reinvented himself as a veteran leader and someone who still has a lot left in the tank. In fact, he averaged 16.4 points, 4.5 rebounds and 8.9 assists in 2020-21. The 11-time All-Star also shot 50% from the field, including a 40% mark from three-point range.

For pretty much the past couple years, it has been a foregone conclusion that Paul would opt into his contract for the 2021-22 season — paying him an otherworldly $44.4 million in the process.

That might no longer be the case. According to Eric Pincus of Bleacher Report, Paul is going to opt out of said contract and become a free agent later this summer.

“Paul has a $44.4 million player option, which according to several sources, he intends to decline with hopes of inking a new multiyear deal,” Pincus reported.
Suggestions are that Paul could be looking at $100 million over three years as a way to find that one final long-term contract. It’s unknown whether the shoulder injury he’s currently dealing with might impact this.

It also seems to be likely that Paul would want to return to the Suns after joining forces with Devin Booker to post the second-best regular-season record in the NBA. However, we’ve seen multiple shocking moves during NBA free agency.

Squarely in the back end of his career, Paul might want to join a potential superteam in order to win that elusive title if it does not happen this summer. If so, here’s a look at three potential landing spots for CP3.

Chris Paul to the Los Angeles Lakers
A lot of this will be dependent on whether Paul might take less to join best bud LeBron James in Southern California. It will also rely on Montrezl Harrell opting out of his contract for next season with the Lakers finding takers for Kentavious Caldwell-Pope and Kyle Kuzma in trades.

With all of that said, it could very well work. Dennis Schroder is set to hit free agency and has struggled big time during the playoffs. Does Los Angeles want to match offers that might come in at $20 million annually? Sure, adding Paul to the mix with King James and Anthony Davis would force the Lakers to pretty much fill out their remaining roster spots with veteran-minimum players. But that would be a heck of a big three.

Chris Paul to the New York Knicks
As currently constructed, New York might not make sense for Paul. He wants to join a contender. Even then, they are coming off a surprising NBA playoff appearance and have a ton of cash to spend in free agency this coming summer. The Knicks are also said to be an attractive landing spot for big-name players.

Paul could very well pull a Kawhi Leonard and look to team up with another star in the Big Apple. New York is slated to have north of $56 million to spend on the open market. Perhaps, seeing if someone like the aforementioned Leonard or Bradley Beal would like to join him with the Knicks to team up with R.J. Barrett and Julius Randle could make sense. That would be an instant contender.

Chris Paul to the Miami Heat
Fresh off an extremely disappointing first-round exit in the NBA playoffs, there’s a darn good chance that Heat front office head Pat Riley is going to shake things up this offseason. Miami can create $34.4 million by declining the 2021-22 options on the contracts of Goran Dragic and Andre Iguodala. That’s pretty much what it would cost to being Chris Paul in.

The idea would be for CP3 to team up with Jimmy Butler and stud center Bam Adebayo. It would also enable Tyler Herro to move to a more traditional off-ball role after struggling at times playing the point this past season. While this might not be enough to compete with the Brooklyn Nets back east, it would give the Heat a fighting chance. That’s something we didn’t see during the 2020-21 season.