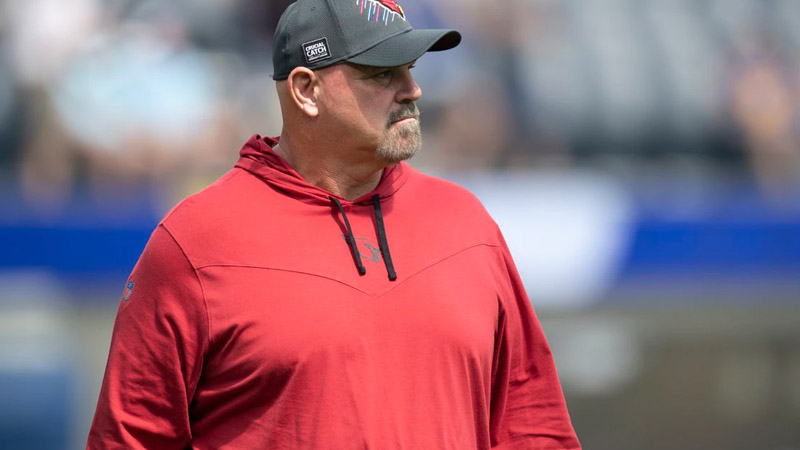 Sean Kugler came to the Cardinals in 2019. The Arizona Cardinals fired assistant coach Sean Kugler after he allegedly touched a woman in Mexico City during the weekend before their game against the San Francisco 49ers according to reports.

According to ESPN, the incident involving Kugler was reported to Mexican authorities, who then informed the Cardinals. Arizona landed in Mexico City on Saturday, with the alleged incident taking place on Sunday.

Kugler, 56, joins Kliff Kingsbury’s staff in 2019 as an offensive line coach. The Cardinals’ head coach told the Arizona Republic on Tuesday that Kugler was dismissed and sent home following an incident. He was formerly the head coach at the University of Texas at El Paso from 2013 to 2017, and he has had a number of other college and professional roles over the last three decades.

“Obviously he’s been relieved of his duties, as you’ve seen,” Kingsbury said, adding that he’s “really limited” in what he can say for now because of the legal process.

“We relieved him of his duties, and he was sent home Monday morning prior to the game,” he told the outlet. “It’s challenging anytime you make a staff change in that type of manner and I’m just going to leave it at that.”

According to ESPN, Kugler is the second coach in the last year to be accused of assaulting a woman.

In May, James Saxon went to Indiana police after being accused of assaulting a lady in her home. He apparently remained with the Cardinals until his arrest became public in August. He resigned from the position in October and received a one-year suspended sentence as well as one-year probation. Arizona was defeated 38-10 by San Francisco on Monday night.

Canadian Paramedic Unknowingly treats her daughter in Fatal Car Accident: “She was a fighter”

Clemson to Suspend Four Players for Season-Opener Against UGA