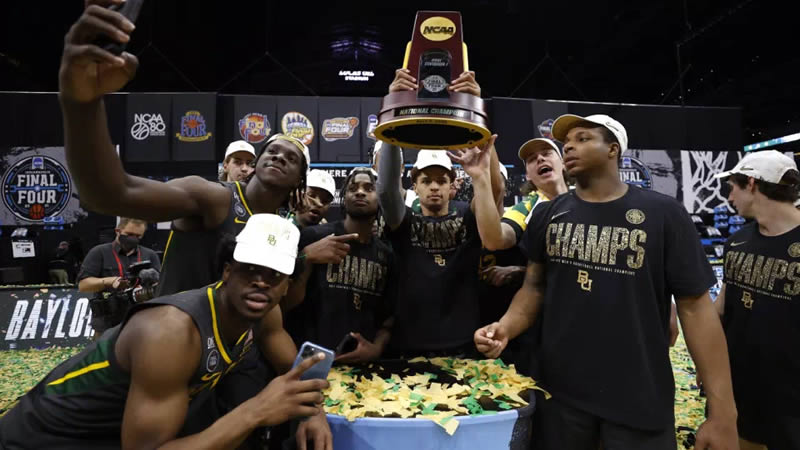 From the first Associated Press poll of the preseason, the prospect of this Gonzaga team running through men’s college basketball undefeated offered the season’s most compelling tension.

It’d been 45 years since Indiana last accomplished that feat in men’s basketball, and every Zags blowout victory — 29 wins by double-digits in 31 games — ratcheted up the prospect of them capturing history.

On the cusp of a generational moment on Monday night in the NCAA title game, Gonzaga’s sprint toward history got run off the floor, 86-70.

No. 1 Baylor smothered Gonzaga’s historic offense, blitzed the Zags’ overmatched defense and delivered a flogging for the ages. In the rare NCAA final matchup of the consensus two best teams in the sport, there was no doubt which clearly deserved the top designation.

Baylor declared with a relentless stream of exclamation points which of the country’s top two teams we should have been focused on this season.

After a Gonzaga season defined by its dominance, the Zags stood out only by how thoroughly they were dominated. Gonzaga All-American center Drew Timme looked outclassed by Baylor big-men Jonathan Tchamwa Tchatchoua and Flo Thamba. Star Zags wing Corey Kispert got smothered to a shadow of his All-American status, shooting just 5-for-12. Gonzaga’s perimeter defense got spread and sliced apart as if Baylor’s Davion Mitchell and Jared Butler wielded Ginsu knives.

“They just beat us. They beat us in every facet of the game tonight,” Gonzaga coach Mark Few said. “They deserve all the credit.”

It wasn’t as much that Gonzaga shot poorly, it’s that the Zags couldn’t even get shots off, as they attempted 18 fewer than the Bears. Baylor, which led the country in 3-point shooting, hit 7-for-12 in the first half on the way to a 10-for-23 night. Butler picked apart mismatches on the perimeter to lead all scorers with 22. MaCio Teague, who scored 19 points, streaked out in transition and Baylor mauled Gonzaga on the boards with 16 offensive rebounds.

Instead of Gonzaga reaching the rarest of airs in college basketball history, we’re left wondering if this Baylor team could have been lodged with the all-time greats. Baylor’s undefeated start ended soon after they endured a three-week COVID-19 pause in February. Baylor began 18-0, but lost to Kansas and Oklahoma State in the wake of the time off. It will be the what-could-have-been that hangs over this team’s all-time greatness.

Baylor spent much of March chasing the standard of dominance it had flashed the season’s first two months, with coach Scott Drew lamenting that his team’s defense slipped from No. 3 nationally to No. 44. But a few weeks of practice brought some needed consistency and conditioning, leaving Baylor fans wondering what could have been if they hadn’t taken that pause.

On Monday, Baylor’s trio of guards revved up, their defense locked down and the Bears set the standard for the season with a dominant performance.

Baylor finishes this season 28-2, winners of the first-ever men’s basketball tournament title in school history. Baylor hadn’t reached the Final Four since 1950 and hadn’t played in the NCAA title game since 1948. This marks the culmination of coach Scott Drew digging out of the biggest scandal of this century, as he took over a Baylor program handcuffed by NCAA sanctions and tainted by the murder of a player, Patrick Dennehy. Eighteen years later, the school is at the pinnacle of the sport.

The Bears came to the title game much better tested than the Zags. Baylor faced 12 ranked teams prior to Monday night, while Gonzaga faced just six. Gonzaga plays in the WCC, a collection of relative West Coast basketball lightweights compared to Baylor’s Big 12. Whether more mettle would have mattered will be an argument for Final Four barstools when we can reattach ourselves to them in 2022. But for now, the West’s title drought continues, as Arizona winning in 1997 is that region’s last NCAA title.

Baylor opened up the game on an 11-1 run, jumped out to a 19-point first-half lead and so thoroughly disrupted a Gonzaga offense that ranked first in college basketball history in two-point field goals that the Zags didn’t score a field goal for the game’s first 5:32.

Gonzaga attempted just 22 shots in the first half, while Baylor made 19 of 38. Gonzaga turned the ball over eight times, yielded nine offensive rebounds and generally looked a step slow, inches short in the post and failed to match Baylor’s energy.

“They punched us in the mouth, right from the get-go,” Kispert said after the game.

Mitchell and Jared Butler picked mismatches and delighted in exploiting them with flair, with Timme’s lacking off-foot speed exposed consistently. Butler became the first player since Syracuse’s Carmelo Anthony in 2003 to score 20 points and dish seven assists. Baylor’s Mark Vital’s eight offensive rebounds tied as the second most in an NCAA title game since 2000.

The final minutes of the game played out like a dance party, tribute and salute to the Bears. Gonzaga briefly cut the lead to single digits in the second half — it’ll always have those 26 seconds of 58-49 — but the end game unfolded with sing-song salutes by the green-clad Baylor fans. Baylor dribbled down the shot clock out of mercy in the final two minutes, and the din of the Baylor faithful grew louder with every bounce.

Along with a historic resuscitation off a scandal-scarred program, Drew also delivers the first NCAA title to the state of Texas since the historic win in 1966 by Texas Western.

Baylor captured history by completely dismantling Gonzaga, both delivering and erasing history with a furious flourish.