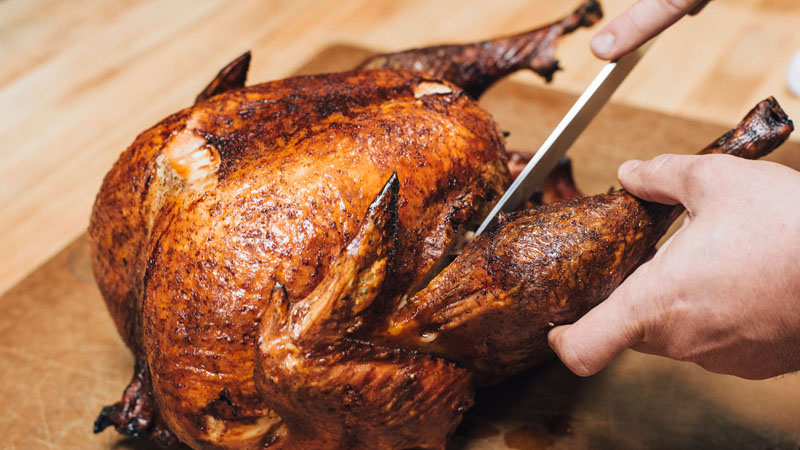 There are so many things to be grateful for at Thanksgiving, but the big bird usually isn’t one of them. Let’s face it: Turkey isn’t the most flavorful meat on earth. And when it’s served dried out (as it often is), it tastes like sawdust. The key to a succulent and delicious turkey is brining, a thankfully simple technique that holds in the bird’s natural juices and infuses it with robust flavor.

Aside from the ingredients, the only thing you’ll need is a pot or container that’s large enough to fit a whole turkey and nine liters of water while still being small enough to fit in your fridge. You can always rearrange your fridge’s shelves temporarily if need be. From there, brining is a snap.

Once you have your brine, pour the mixture, along with eight additional liters of cold water, into your container. Put the turkey in, close the lid, and refrigerate for 16 hours. Then pat it dry and roast your bird in the oven on a bed of roughly cut carrots, celery, and onion. Congratulations, you’ve just brined your first bird. Now get ready to serve your guests something they can really be thankful for.

Remove the turkey from the oven when its core temperature reaches 180°.

This quick-and easy brine recipe is loaded with flavor:

Add all ingredients to one liter of water, give a good stir, and cook over medium heat until salt and sugar dissolve. For more of a kick, slice the lemons and squeeze them in the water before tossing them in, cut the garlic bulbs in half—don’t worry about removing the skin—and give the rosemary a bit of a whack to release the herb’s pungent oils.

How to Carve a Thanksgiving Turkey Like a Pro

Put a carving knife in some guys’ hands and they turn into Dexter. For your Thanksgiving turkey, follow these steps and spare your guests the horror.

Not cooking for an army? You can still whip up an amazing meal from a simpler Thanksgiving turkey. Pick up some turkey breasts from the butcher, and grab some butcher’s twine while you’re there. Truss the turkey by tying the twine around the breasts in equal intervals to ensure that they roast evenly. Next, heat olive oil in a sauté pan over medium heat and sear the turkey until all sides are caramelized. Then place the meat on a bed of roughly cut veggies (try parsnips, squash, carrots, and celery), and roast in the oven.

8 Healthy Foods Nutritionists Say You Should Be Eating

14 Foods Healthy Eaters Were Obsessed With in 2016