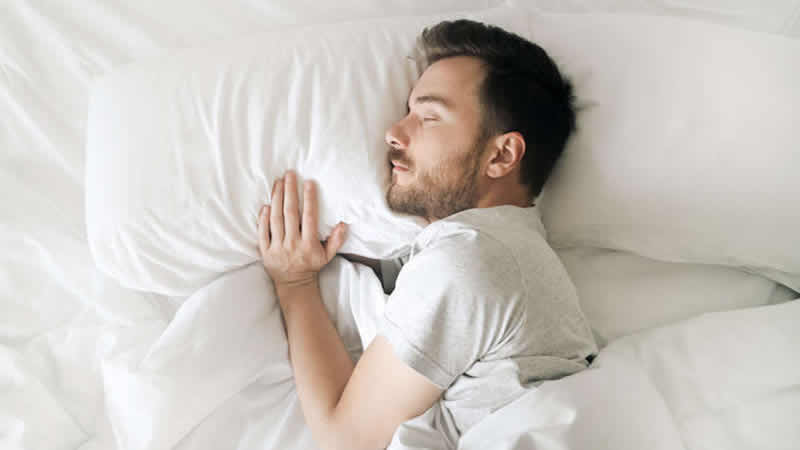 Dementia, a general term that describes the impaired ability to remember, think, or make decisions that interferes with doing everyday activities, impacts an estimated 5 million Americans at any given time.

However, the cognitive disease is not a normal part of aging, says the CDC. There are a number of risk factors that influence whether or not someone will develop one of the many forms of the disease.

Many of them are genetic. However, some are environmental or behavioral. Now, a study published in Aging has found a link between one unhealthy habit and dementia, finding that it can double an individual’s chance of developing it. Read on—and to ensure your health and the health of others, don’t miss this urgent news:

If You Sleep Less, You’re More Likely to Get Dementia
Investigators at Harvard-affiliated Brigham and Women’s Hospital found that those who get five or less hours of sleep per night are twice as likely to develop dementia than those who slept seven to eight hours per night. Even more, they discovered a link between sleep disturbance and sleep deficiency with overall risk of death.

“Our findings illuminate a connection between sleep deficiency and risk of dementia and confirm the importance of efforts to help older individuals obtain sufficient sleep each night,” lead author, Rebecca Robbins of the Division of Sleep and Circadian Disorders, explained in a Harvard press release.

As part of their research Robbins and her team used data collected from 2,610 older adults participating in the National Health and Aging Trends Study (NHATS), a longitudinal study of Medicare beneficiaries 65 years and older. They focused on their sleep-related responses, and then collected information about patient outcomes—including dementia and death—five years post-survey.

They found a variety of sleep related factors influenced chances of developing dementia. For example, routinely taking 30 minutes or longer to fall asleep was associated with a 45 percent greater risk for incident dementia, while “routinely experiencing a difficulty in maintaining alertness, routinely napping, reporting poor sleep quality, and sleeping five or fewer hours per night was also associated with increased risk of death.”

Sleep Is Good For Your Brain
“This prospective study reveals that sleep deficiency at baseline, when the average age of participants was 76 years old, was associated with double the risk of incident dementia and all-cause mortality over the next four to five years,” senior author Charles Czeisler, chief of the Division of Sleep and Circadian Disorders, added. “These data add to the evidence that sleep is important for brain health and highlight the need for further research on the efficacy of improving sleep and treating sleep disorders on the risk of Alzheimer’s disease and mortality.”

The researchers hope their findings will encourage further studies surrounding sleep and its relationship to dementia and death.

“Our study demonstrates that very short sleep durations and poor-quality sleep in the elderly increase the risk of developing dementia and earlier death. There should be increased focus on obtaining healthy sleep in older adults,” second author Stuart Quan of the Division of Sleep and Circadian Disorders added.

Warding off dementia isn’t the only benefit of getting enough z’s. According to the U.S. Department of Health and Human Services, other benefits include improved immunity, weight management, reduced stress and mood improvement, a clearer mind to improve performance at school and work, better decision making abilities and a decreased risk of accidents, and a lower risk of serious health problems—including diabetes and heart disease.

Lori Loughlin and Mossimo Giannulli Are ‘Beyond Relieved’ to Complete Prison Sentences: Source