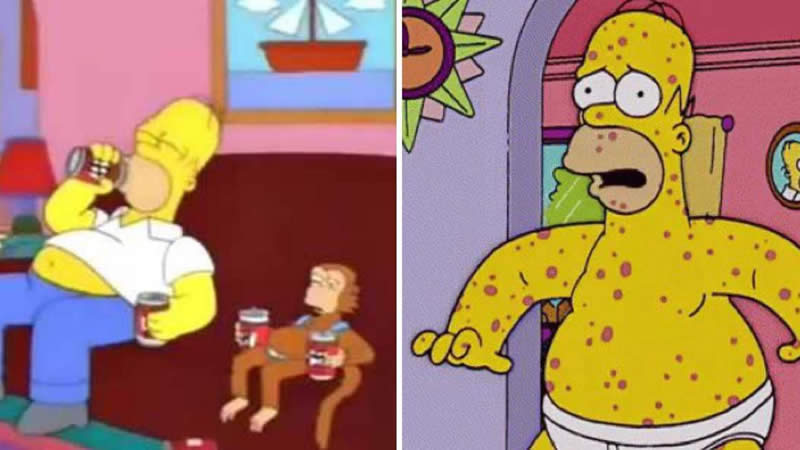 You can’t dispute the long-running cartoon that appears to predict the future—from showing smart watches and video chat long before they were created to showing Siegfried and Roy being attacked by their tiger.

While it is possible to argue that these events were inevitable, there have also been some more shockingly accurate predictions.

The Ebola outbreak of 2014 was predicted in the cartoon from 1997, which also shows Lady Gaga performing at the Super Bowl five years before it actually occurred. Even the show predicted that Donald Trump would win the election for president.

Additionally, some claim that The Simpsons foresaw the 9/11 terrorist attack.

However, many now think that The Simpsons predicted the current monkeypox outbreak.

Last month, the World Health Organization issued its highest alert about the outbreak due to an increase in cases across 75 countries.

More than 2,000 cases have been reported in the UK alone.

In addition to a rash, the illness frequently causes fever, headaches, swollen lymph nodes, muscle aches, and a severe loss of energy.

Since then, a Simpsons episode from season seven in which Bart and Milhouse interact with a monkey has been making the rounds on social media among fans and conspiracy theorists.

Sharing a video on TikTok one fan wrote: “This episode of the Simpsons aired in 2005 this show is known for its predictions.”

They titled the clip “Did the Simpsons predict monkeypox?”

One person said: “I need to know what the writers of the Simpsons know that we don’t… they had a monkeypox episode in the early 2000s…”

Another wrote: “Not the Simpsons predicting the monkeypox.”

While another person shared an image of Homer covered in a rash and said: “The Simpsons never fail #monkeypox.”

However, others, have put the rumors to rest and said that the image of Homer covered in a rash is from a different episode in which he is suffering from chickenpox.

Despite this, Milhouse ends up getting the virus after being exposed to the monkey during the episode where Bart has a monkey on his head.

The Simpsons’ frighteningly accurate storylines have already been addressed by the show’s producers.

Speaking in interviews compiled for the YouTube channel Brut, the show’s creator, Matt Groening, said: “We take the most unlikely, ridiculous, stupid, impossible, never-will-happen joke, and then it turns out that our imaginations aren’t that imaginative.”

Writer and producer Al Jean added: “I think that if you have a bunch of people who are smart, who are trying to predict the future if you throw enough darts, enough darts hit the dartboard.”

Pete Davidson wore a weird shirt after his breakup with Kim Kardashian, and fans believe it to be a message