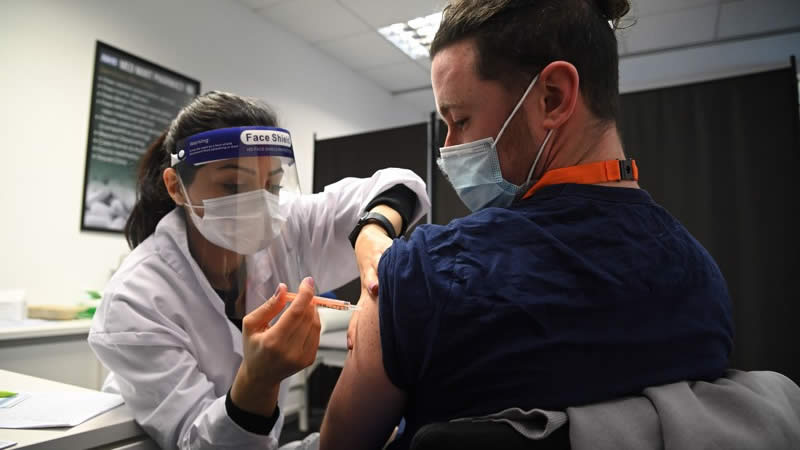 While polls show that one-third of Americans are still hesitant about getting vaccinated, a new report from the Centers for Disease Control and Prevention, released Friday, is providing more reason to feel confident.

In a press conference, CDC Director Dr. Rochelle Walensky told reporters that roughly 50 percent of individuals experience minor side effects after getting the vaccine, such as headache and dizziness. In a tweet following the briefing, she reinforced the promising nature of the data: “We have implemented the most comprehensive vaccine safety monitoring program in CDC history. Today’s @CDCMMWR data are reflective of this effort and are reassuring about the safety of #COVID19 vaccines. The vaccines are safe and they will save lives.”

As states battle obstacles in vaccinating, here’s what you need to know about the safety data.

The vast majority of adverse outcomes have been minor

The report covers the first month of Moderna’s and Pfizer’s vaccine distribution, using safety data from the Vaccine Adverse Event Reporting System (VAERS) and the CDC’s text-message-based health checker known as “v-safe.” Between Dec. 14 and Jan. 13, an estimated 13.8 million doses of the vaccines were administered, with 6,994 reports of adverse events after vaccination. The CDC classified 90 percent of these as “nonserious,” meaning they were temporary and not life-threatening.

The five most commonly reported nonserious outcomes were headache, fatigue, dizziness, chills and nausea — all of which were more likely to occur after the second shot. Dr. Gregory Poland, a vaccinologist and co-director of the Mayo Clinic’s Vaccine Research Group, says it’s “reassuring” and consistent with earlier data. “What this shows is the lack of any serious side effects related to either of the two mRNA vaccines,” Poland says. “It shows what the clinical trials showed with the second dose — that there’s an increase in … local systemic side effects that go away.”

Anaphylaxis was rare, occurring at a rate of 4.5 people per million

The 9 percent of serious outcomes, Poland says, aren’t cause for concern. One of the most discussed was anaphylaxis, a life-threatening but treatable allergic reaction that occurred at a rate of 4.5 people per million. The number is smaller than the CDC’s previous prediction, which was a rate of 11 individuals per million. Despite earlier suggestions that the vaccines may cause increased allergic reactions, the organization says that it is “within the range reported after receipt of inactivated influenza vaccine.”

Although individual reports of deaths after vaccination may seem alarming, the researchers found no link between the 113 deaths — 78 of which occurred among long-term facility residents — and the vaccine. “Reported causes of death in [long-term care facility] residents after COVID-19 vaccination are consistent with expected all-cause mortality in this population,” the report reads. “Among deaths in persons with available death certificate and autopsy information who were not [long-term care facility] residents, causes of death were consistent with background all-cause mortality and did not indicate any unexpected pattern that might suggest a causal relationship with vaccination.”

Poland says this data is expected. “What this clearly shows is what all of us thought anyway, and that is that all of those deaths are unrelated,” says Poland. “We would expect in fact, a greater number of deaths [among the long-term facility residents] by chance alone, given the medical condition of these individuals.”

The report also adds further evidence to discount the widely circulating myth that the vaccine may interfere with pregnancy or cause infertility in women. The CDC writes that more than 10,000 women were pregnant at the time of their vaccination, and an additional 262 received a positive pregnancy test following vaccination.

Poland says the bottom line is that the benefits far outweigh the risks. “Other than somebody who has an anaphylaxis reaction to a component of this vaccine, these are safe, they are effective,” says Poland. He adds that it’s important to set expectations. “You’re likely to have some [local] side effects after the second dose,” he says. “It doesn’t mean anything is going wrong — in fact, it means you’re developing a good immune response that will protect you.”

What to Eat and Drink in NYC in September