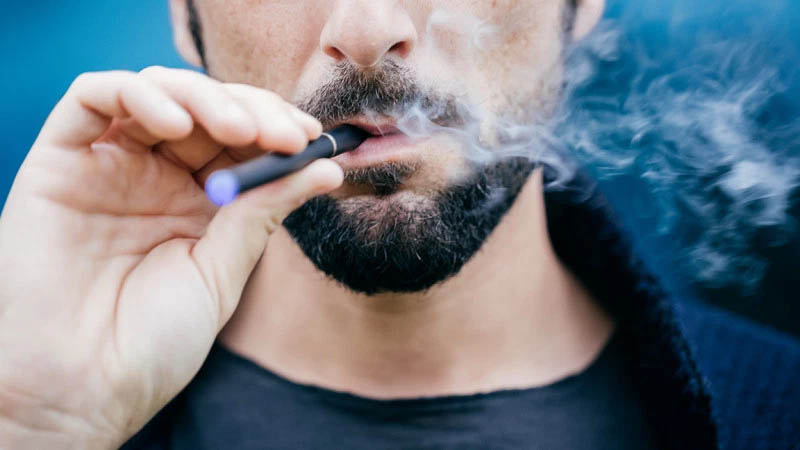 If you’ve considered puffing on an e-cigaretteOpens a New Window., chances are you’re a smoker trying to ditch the death sticksOpens a New Window.. You’ve probably heard cigarettes’ electronic brethren are less damaging to your lungs, deliver less uber-addicting nicotine and, fingers crossed, can help you wean off the traditional kind.

1. They Fill Your Lungs With Less Carcinogens Than Cigarettes

Completely switching over from regular smokes to e-cigs lowers your exposure to toxicants and carcinogens, confirms a 2018 position paper in JAMAOpens a New Window.. “There are more than 7,000 chemicals in cigarettes, including dozens of carcinogens,” says Jonathan Foulds, Ph.D., a professor of public health sciences and psychiatry who studies smokers and tobacco products at Penn State University. The vapor that comes out of e-cigarettes isn’t harmless, but it has maybe 10 to 20 chemicals compared to a cigarette’s thousands, in part because you aren’t getting the chemical reactions from combustion, he explains. There are a few bad habits that override this benefit, though: If you keep smoking on top of vaping—like most e-cig users do—you’re actually putting more chemicals into your body; and draining the vape to the last drop creates its own set of health concerns. “Once you reach the point of dry vaping—continuing to puff at the bottom of the cartridge until there’s no liquid left—there’s nothing to cool down that coil, so the burning creates higher amount of toxins,” Foulds explains. Most importantly, just because e-cigs deliver less carcinogens doesn’t mean they’re harm-free. “E-cigs are different from cigarettes and they produce a different mixture of toxicants, most of which we don’t even know about yet since people have been studying e-cigs for a fraction of the time we’ve been studying cigarettes,” says Glantz. Plus, if you’re a lifelong e-cig user, even that low level of carcinogen exposure will catch up with you.

A large study review last year in the Annual Review of Public HealthOpens a New Window. found despite having certain benefits over traditional cigarettes, the electronic kind still exposes you to high levels of ultrafine particles and other toxins that can increase your risk of non-cancer lung disease (and cardiovascular disease)—at rates similar to conventional cigarettes. Lung damage is thanks to a few things. For one, the two chemicals found in all e-cigarette liquid—propylene glycol and vegetable glycerin—are the same compounds used in a fog machine, and an older study foundOpens a New Window. theatrical workers often exposed to this mist formula had increased dyspnea (labored breathing), chest tightness, and wheezing. Vaping also lowers your ability to fight off an infection: E-cigarette liquid and vapor harm alveolar macrophages, our main respiratory immune response that gets rid of infections, toxins, and allergens, according to a 2018 study in British Medical Journal ThoraxOpens a New Window.. Meanwhile, research out of UNC Chapel Hill reports cinnamon flavoring in particular likely impairsOpens a New Window. respiratory immune cell function, lowering your ability to fight off an infection in the respiratory tract.

And that’s just the tip of the iceberg of the harm flavorings pose: One 2017 Harvard studyOpens a New Window. analyzed 24 different flavored e-cigarette brands and found all had at least one aldehyde or flavoring chemical on the FEMA “High Priority Chemicals” or FDA Harmful and Potentially Harmful Constituents lists. What’s more, diacetyl—a chemical known to wreak havoc on your respiratory system and cause “popcorn lung”—was found in more than 60 percent of the samples. Why are the flavorings allowed? Excluding the above offenders, most of the chemicals that add flavor are actually formulas that have been approved by the FDA for use in food, Glantz explains. But in e-cigs, we aren’t ingesting them: “Heating the flavorings, aerosolizing them, and breathing them in will tear up your lungs,” he confirms.

3. They Wreak Havoc on Your Heart

Just like smoking cigarettes, we know puffing the electronic variety puts your heart at risk. Two studies from Glantz’ team have found that not only does regular e-cigarette use increase your riskOpens a New Window. of having a heart attack, but since most who use the electronic stick also still puff the conventional kind, dual-users’ riskOpens a New Window. of heart attack is actually five times higher than folks who don’t smoke at all. Once again, since research on e-cigs is so new, we don’t exactly know why. Research out of PolandOpens a New Window. suggests the acrolein, formaldehyde, and ultrafine particles created in heating the e-liquid likely contribute to the hardening and narrowing of your arteries.

And those ultrafine particles, which are about 1/100th the size of a human hair—so small they can pass through pretty much any wall in your body and carry things right into your blood or cells—probably play a huge role, Glantz says. When you inhale e-cig vapor (or cigarette smoke, for that matter), these ultrafine particles deliver the nicotine straight to your lungs, then give a big blast to your heart, all within seconds. Ultimately, this restricts blood flow to your ticker. What’s more, inhaling these toxic substances activate platelets, Glantz says. When platelets float around systematically (instead of reacting to, say, a cut), they can stick to other free-floating platelets. Eventually, this may form a clot that floats through your blood until it gets big enough to clog an artery and cause a heart attack or, if it’s in your brain, a stroke, Glantz explains. Even if it doesn’t turn into a life-threatening event, the conglomeration of platelets rolling through your vessels tears up your endothelium (the tissue that surrounds your organs, particularly blood vessels and the heart). These tiny tears can build up to lesions, which can trap fat and burst, blocking an artery and causing a heart attack, he adds.

4. They Can Reduce Your Dependence on Nicotine

The nicotine in e-cigarettes plays on the reward centers in your brain the exact same way it does with the traditional kinds, Foulds says. The difference: While cigarettes deliver a high amount of nicotine with each puff, doses in e-cigarettes are less reliable and often lower, even if you choose a high-nicotine brand, he says (Note: Some e-cigs can hold their own against the traditional kind, but standardization hasn’t hit yet, so it’s hard to know how much nicotine you’ll really get from a brand, regardless of what the label says). And in fact, ex-cigarette smokers report feeling less dependent on e-cigarettes than they remember being on the sticks, according to a 2015 study by Foulds’ teamOpens a New Window.. “On average, e-cigarettes, puff for puff, are delivering less nicotine to your lungs and to your brain, so it’s enough to take the edge off cravings and reinforcing—but overall weakening—the link with your addiction,” Foulds explains. It can work:

5. In Reality, They’ll Probably Keep You Just as Addicted

Even though 85 percent of e-cigarette users said they took up the pen to quit, they were no more likely to give up cigarettes than people who skipped vaping, according to a 2013 study across four countries in American Journal of Preventive MedicineOpens a New Window.. What’s more, a handful of studiesOpens a New Window. report taking up e-cigs makes smokers less likely to quit, instead turning them into dual users. “Most people try e-cigarettes to help them quit, and they think something miraculous will happen that will make them not want cigarettes any more,” Foulds says. “But they actually just end up supplementing with the electronic kind in situations where they can’t smoke traditional cigarettesOpens a New Window. and use it to top off their nicotine. They end up often taking in more nicotine in a day than they would’ve without e-cigarettes.” Let’s be clear: If you switch over entirely to e-cigarettes, your brain and body will benefit, both docs agree. But the only way they’ll help you quit is if you give up the cigs for the electronic kind, then set a quit date for all nicotine entirely, Foulds advises.

6. They May Cause Asthma in Kids and Teens

“Studies in young people using e-cigs have found some of the chemicals are causing irritant effects that can trigger asthma and wheezing,” Foulds says. (The same may go for adults, he adds, but since most users are ex-smokers—a habit we know contributes to asthma—it’s hard to tease out the source.) A 2017 study in Currently Allergy and Asthma ReportsOpens a New Window., for example, found kids with asthma were more likely to use e-cigarettes than non-asthmatic peers, and while that doesn’t prove cause and effect, the study authors add that the two key ingredients in e-cigs—propylene glycol and vegetable glycerin—produce a whole slew of chemicals once heated (i.e., acrolein, formaldehyde, and acetaldehyde) that are known to be toxic to your respiratory tract. On top of asthma, smoking in general as a child and teen—cigarettes or e-cigs—can slow long development and increase your risk of developing chronic obstructive pulmonary disease (hallmarks include blocked airflow and difficulty breathing) in adulthood, according to the CDCOpens a New Window..

7. They Exacerbate the Harm of Cigarettes Themselves

“There’s an assumption made by most e-cigarette users that the device is like a cigarette, but not as bad, so piling e-cigarette use on top of a regular habit of cigarettes isn’t that bad,” Glantz says. That assumption is wrong: “If you’re a dual user—which is some 70 percent of people using e-cigarettes—you’re worse off than if you were just smoking because they pose an independent risk on top of any smoking that you do.” Compared to people who solely smoked cigs (or e-cigs), dual users had higher levels of nicotine, heavy metals, and some carcinogens, in their urine, which raises their risk of cancer, addiction, and everything from lung disease to infertility beyond that of single-use smokers, according to a recent study conducted by the CDCOpens a New Window.. Meanwhile, when chronic obstructive pulmonary disease-suffering smokers switched to vaping, it actually worsened their pulmonary health, says a study in Journal of General Internal MedicineOpens a New Window.. And while daily smokers’ risk of a heart attack is three times higher than non-smokers, dual users’ risk kicks up to five times higherOpens a New Window.. Plus, consider this: You don’t get most smoking-related diseases from puffing for a few months, but from a decade or decades of smoking. And when you consider that taking up e-cigarettes deters smokers from quitting, it instead heightens their risk of becoming (or staying) long-term users, and therefore, developing those long-term smoking health consequences.

8. They Probably Do Things We Don’t Even Know About Yet

“We’ve been studying cigarettes for at least 70 years, but e-cigarettes have been getting studied for all of maybe seven,” Glantz says. Okay, he’s being hyperbolic, but the first electronic cigarette wasn’t even introduced in the U.S. until 2007, so it’s impossible to have a good sense of long-term risks yet.

One of the biggest issues: We don’t know how the ingredients—propylene glycol, vegetable glycerin, flavorings, and other additives—react and interact when they’re heated, aerosolized, and used 20 to 30 times a day more than their FDA-approval intends, Foulds says.

Case in point: A study from Johns HopkinsOpens a New Window. last year looked at 56 different e-cigs and found a significant number of the devices generated aerosols with potentially unsafe levels of lead, chromium, manganese, and/or nickel—chronic inhalation of which has been linked to lung, liver, immune, cardiovascular and brain damage, even some cancers. These metals aren’t in the liquid, but instead are probably a result of the metal coils heating and leaking the toxic substances.

5 Surprising Benefits of Exercising at Night