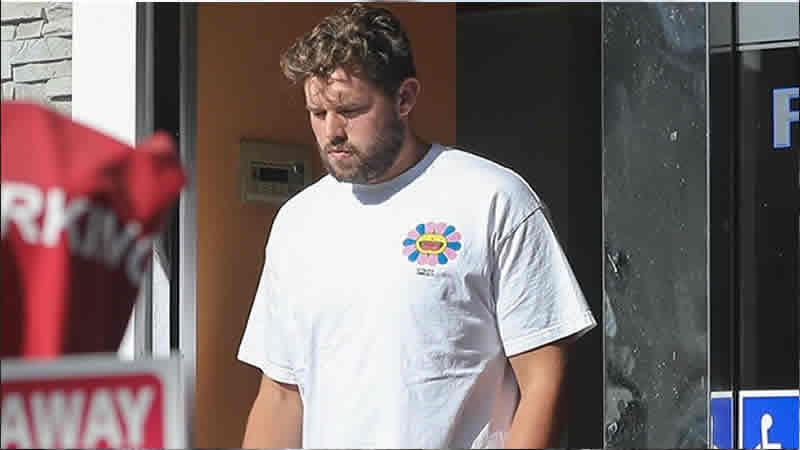 Christopher Schwarzenegger, 23, usually manages to avoid paparazzi and keep his life fairly private, but on July 7, photographers caught him while he was grabbing lunch in Beverly Hills. The 23-year-old wore a white t-shirt and a pair of green shorts, showing off a very slimmed-down figure. Christopher’s weight loss first turned heads when he was photographed out in July 2020, but these new images reveal that he’s shed even more pounds and has toned up in the year since, as well. In the new photos, Christopher was also rocking a neater hairstyle, and had scruff on his face, compared to the more bare-faced images we’re used to seeing of him.

Christopher was born into fame due to his parents being Arnold Schwarzenegger and Maria Shriver. However, while his older siblings, Katherine Schwarzenegger and Patrick Schwarzenegger, have somewhat embraced life in the spotlight with public careers of their own, Christopher and his sister, Christina Schwarzenegger, are much more private (the kids also have a half brother, Joseph Baena, from Arnold’s affair with the family housekeeper). Christopher’s Instagram is private, and his bio even warns fans not to try and follow him if they don’t know him personally.

In May 2020, Christopher graduated from the University of Michigan, which motivated him to get in shape and live a healthier lifestyle. “He made it his goal to get healthy for graduation and he stuck to it,” a source told HollywoodLife EXCLUSIVELY in 2020. “He started working out and making better food choices. He was away at school living like a typical college kid for a few years, but he’s growing up now and ready to take better care of himself.”

Our source added that Christopher didn’t use a “fad diet or crash diet” to start losing the weight. Instead, he simply cut out junk food an began working out. Clearly, he’s been able to keep up that healthy regimen into 2021, because he looks even more fit these days!