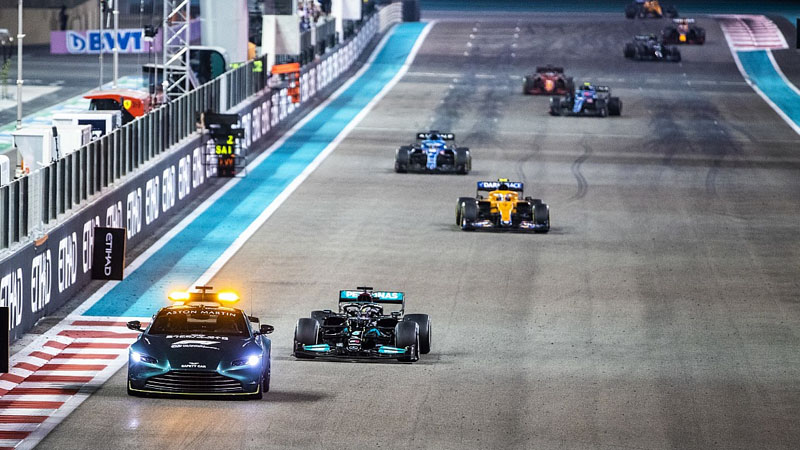 Formula 1 is braced for a crucial day that might decide its credibility in the eyes of many fans as the FIA gives its report to teams on the Abu Dhabi safety car controversy.

An F1 Commission meeting will be informed of the findings and reactions following a thorough investigation of the management of the safety car restart at last year’s season finale.

The moment comes after weeks of backlash from fans over F1 race director Michael Masi’s apparent disregard for the regulation book in selecting which backmarkers might Dunlap themselves at the conclusion, and then starting the race one lap ahead of schedule.

Those decisions put Max Verstappen in the ideal position to utilize his fresh tire advantage to pass Lewis Hamilton on the final lap of the Abu Dhabi race and win the championship.

As per Autosport, while the FIA blamed the scale of the issue on a ‘misunderstanding’ by fans and the media, the outcry over the event has not subsided since, and debate over it is still raging.

The #F1xed hashtag was trending again just a few weeks ago when a radio interview between Red Bull sporting director Jonathan Wheatley and Masi emerged and went viral on social media.

As part of their investigation, the FIA promised to consult with all drivers and teams in order to develop a regulatory framework that would prevent future controversies.

A restructuring of race control is likely, with increased support for the race director to ensure that he is not overburdened with his responsibilities.

However, it is unknown whether Masi will return for the 2022 season or will be replaced.

Furthermore, F1 has stated that open radio communications between teams and race control must be discontinued in order to avoid the severe lobbying that Masi experienced last season.

The FIA is also likely to make clearer procedures for finishing a race while under the safety car, given it is evident that Masi’s wish to avoid finishing the finale under yellow prompted his decision to restart the race.

The FIA promised ‘clarity’ regarding the laws to participants, fans, and the media in December, but it’s unclear how much of its Abu Dhabi probe would be made public – or even if anything will be shared right away.

Because of F1’s governance structure, any ideas made and agreed upon today by the F1 Commission must still be validated by the FIA’s World Motor Sport Council, which meets on the eve of the season starting in Bahrain next month.

The FIA’s response to the events in Abu Dhabi, on the other hand, will be a significant test for new President Mohammed ben Sulayem, whose tenure may likely be defined by the answer.

Any weak or disguised response from the governing body would almost likely fan the flames of fan displeasure and cast a shadow over the start of the 2022 season, no matter how much the FIA hopes that the Abu Dhabi scandal has faded away from the public consciousness during the winter.

It will also be interesting to see if the FIA admits that the Abu Dhabi GP was handled improperly.

The report’s findings will be critical for Hamilton and his Mercedes team, who have remained relatively silent on the matters since the end of last year.

Hamilton has been evaluating his F1 future in light of the FIA’s response, while Mercedes boss Toto Wolff stated last year that the governing body will be held ‘accountable’ for its conduct in Abu Dhabi.

While the FIA’s report to teams will focus on the events of Abu Dhabi, it is evident that there is still concern about a number of aspects of its running of the championship last year.

There have been concerns about a lack of consistency in penalty decisions and misunderstanding over racing rules even before the final round controversy.

Andreas Seidl, the McLaren team chief, argued at his team’s vehicle presentation last week that new processes are needed to allow the FIA to accept errors and then address them.

“One of the beauties of the sport, not just on the team side but also the FIA side when it comes to the execution of races, is that it is a human sport,” explained Seidl.

“For me, it is very important that we also discuss that there is a mechanism where, if you are in the position that mistakes happen, you actually raise your hand, admit them, and have a mechanism in place in order to correct the consequences that such mistakes or controversies could have.

“That is as important as trying to avoid similar controversies in the first place.”