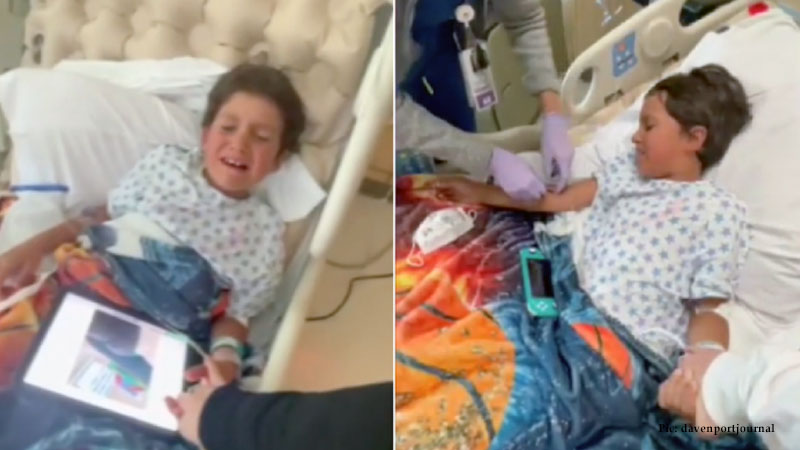 Parents of a young child claim that a bully sent their 8-year-old son to the hospital following an injury at primary school, where doctors battled to save his leg. His family claims that as the young kid stood up to look at the whiteboard, the bully— who was not identified due to his age —placed a pencil on top of it, on which the student then kneeled directly.

According to the boy’s mother, the pencil fractured the knee bone and left a bacterial infection under the muscle. The physicians predict that the 8-year-old student will require at least two weeks of hospitalization and 4-6 weeks of home health care after discharge, according to the parents.

Madeline Flores, the boy’s mother, told FOX 11 that after a second-grade bully purposefully injured her son with a pencil, Carter, 8, was taken to the hospital and required three surgeries to save his leg. Carter’s mother was informed by the medical staff that if they had arrived at the facility 12 hours later than they really did, the 8-year-old might have needed to have his leg amputated.

During an interview with FOX11, Flores reportedly said: “For them to tell you that he might come out of surgery with a hole in his leg because they would have to cut out as much tissue, or that they might have to amputate his leg, or that if it gets in his blood, he could die. They had to come to terms with my son being critically ill at one point, and it was the most heartbreaking thing because he doesn’t understand why somebody would want to hurt him. He just wants to be friends with everybody at his school.”

The unhappy parents also said that their son’s life had been turned entirely upside down by the second-grade bully. Flores claimed that the new student had been bullying the 8-year-old boy all year because he did not want to be friends with her son.

“My son was going to see the whiteboard, to reference it for his schoolwork so he could finish it, and when he went to kneel the little boy was behind him, and he held the pencil with the tip pre-sharpened. When my son’s knee came down on it, it came down, it went all the way through, and it fractured his patella. That then led to a Strep A infection. The hospital here, they were able to work fast, and get him into surgery quick enough to prevent it from spreading into the blood.” the mother told NBC News.

The baby is currently battling Strep A, a potentially fatal bacterial infection, according to the mother, who also claims that the boy was misdiagnosed at another facility. The school district released a statement and said that ‘after a thorough investigation of the incident of the students involved and several witnesses, it was determined to be an unfortunate accident.’

To help with the cost of the medical bills, the family has launched an online fundraiser. According to the parents, the doctors predict that Carter will be in the hospital for at least two weeks and that he would require home health care for 4-6 weeks after his discharge.

“Carter was being bullied at school by the same student for a while. This week, Carter was significantly injured by a bully at school. Carter got up to look at the whiteboard & the bully placed a pencil standing up, which Carter kneeled directly onto. The pencil penetrated to the knee bone—fracturing it & leaving a bacterial infection under the muscle.” the GoFundMe Page wrote.