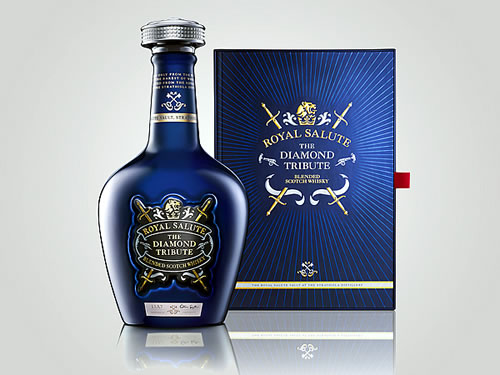 Royal Salute, a brand of luxury scotch whiskey from the Chivas Brothers, which first articulated in 1953 paying homage to Queen Elizabeth II’s coronation, shines in the limelight yet again, introducing a new permanent expression to its range of luxury scotch whiskies – The Diamond Tribute. This exquisite bottle has been produced in commemoration to Her Majesty’s 60th coronation anniversary, and fortunately coincides with the 62 round Royal Gun Salute to mark the coronation of Queen Elizabeth II at HM Tower of London. Guests of Royal Salute were in attendance as part of our long-standing support of Historic Royal Palaces and The Diamond Tribute was served at a reception at the Queen’s House.

The Diamond Tribute takes its name from the most precious of gems. It is evidence to the brand’s long golden tradition of expertly blending only the most precious aged whiskies. The 60th anniversary coronation bottles itself hail from the locked Royal Salute vault at Strathisla – the oldest working distillery in the Highlands – where the casks rest under careful guard and watch until they have reached a minimum of 21 years of age.

The notes in the opulent Diamond Tribute include rich aromas of peaches and sweet poached pears complemented by a sensation of sherry. And a wonderful spicy liquorice tang. “It has a long, sweet, and luscious warmth to finish.”

Since 1953, Royal Salute has enchanted us with different glazes in referral to the rubies, sapphires, and emeralds of the Imperial State Crown. Royal Salute The Diamond Tribute will be available worldwide from July and will retail at $270 in Travel Retail.