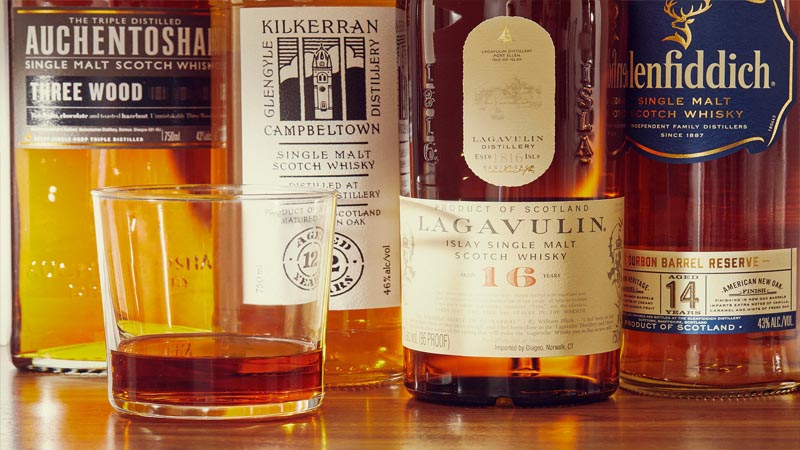 People get hung up on the word “best,” especially when that word comes attached to a phrase like “16 Best Whiskies You Can Buy Right Now.” You can practically hear the protests already—“But if there are 18 of them, how can they all be ‘best?’” To these people I say politely (and with infinite patience): Pipe down. There are as many expressions of scotch as there are angels nipping at every whisky cask in the Hebrides and as there are snooty grammarians who want to take the fun out of the pursuit of incredible liquor.

Do you believe in ghosts? Well, one sip of this elusive liquid from a long-shuttered Dufftown distillery is sure to make you shudder. Pittyvaich was built in 1974 by Arthur Bell & Sons for the primary purpose of providing malt whisky for blends. The distillery was demolished in 2002.

The Pittyvaich 29 Year Old was double matured in Pedro Ximenez & Oloroso sherry seasoned bodega casks, and is the only such whisky the distillery ever produced. This just-released rarity is the stuff of collectors’ dreams—a never-again bottling of exceptional quality.

Part of parent company Bacardi Limited’s new Exceptional Cask Series, Craigellachie 19 Years Old Single Cask is an extremely limited one-time-only release from a Speyside producer that’s been distilling since the 1800s but only recently got into the single malt game.

While the majority of Speyside whiskies are known to be fruity and floral, Craigellachie is a bit of an outlier, crafting spirits that are rich and robust. The 19 Years Old was matured in second-fill Sherry butt casks and offers creamy vanilla and malty sweetness, tinged with liquorice and cinnamon notes. At 55.2% ABV, this is a potent potable indeed.

Cask Strength Peated: Batch 2 , the latest release from under-the-radar Speyside producer The BenRiach, is a single malt Scotch whisky that will test the intestinal fortitude of the heartiest hooch drinkers. Weighing in at a whopping 120.6% ABV, this husky dram is struck through with heavy smoke and wood flavor and dense vegetal notes.

Think of the biggest, brightest bonfire you’ve ever seen, and then try to imagine all that white-hot intensity being bottled for consumption. Fortunately, with a bit of dilution, the whisky’s oomph abates. Adding just a few drops of water reveals all sorts of pleasantries on the palate including butterscotch, crème brûlée, apple and star anise.

These more delicate attributes work in harmony with the peat smoke to really bring the whiskey into balance. Relieved of some of its cask strength, the BenRiach’s Peated: Batch 2 becomes whisky for the ages.

Our friends over at Whisky magazine recently anointed The GlenDronach’s Rachel Barrie “Master Distiller of the Year” for 2020, and we second that laudation. At one of Scotland’s oldest licensed distilleries, Barrie and her team consistently turn out world-class drams such as The GlenDronach Master Vintage 1993 .

A sterling example of sherry cask aging and true Highland single malt style, Master Vintage 1993 (48.2% ABV) offers marzipan and toasted raisin bread on the nose, priming the palate for a delightful mélange of flavors including mocha latte, brioche and prune oil, brightened by a twist of baked orange rind.

This whisky takes its name from a famous whirlpool that lies to the north of Islay, where swimming is definitely not encouraged. Like its namesake, the Corryvreckan single malt  is a deep and turbulent force, swirling with intense flavors such as vanilla, bacon, blueberry, and black tarry espresso that coat the palate with rich, melted, dark fruits.

The finish is long and powerful and delivers chocolate-coated cherries and hot pepper sauce. Awarded The World’s Best Single Malt in 2010 by the World Whiskies Awards.

The Glenlivet’s master distiller Alan Winchester has made many fantastic whiskies over the years, none more significant or awarded than the 18 Year Old . Winchester shepherds this expression through several different cask types, including both first- and second-fill American oak (for tropical fruitiness) and ex-sherry oak (for spicy complexity).

It’s an intense whisky, full of ripe citrus and winter spice flavor. The Glenlivet 18 has garnered virtually every award of note handed out in the spirits industry, and deservedly so. It may well be the most complete mass-market whisky of all.

Old Pulteney, which was founded in 1826, is located way up in the Scottish Highlands near the royal burgh of Wick, making it the most northerly whisky-making facility on the Scottish mainland.

Old Pulteney is known as “the Maritime Malt,” and the 21 Year Old certainly has its sea legs . . . er, sea mouth, as evidenced by its fish-oil-like texture and prominent briny notes. The bulk of the spirit that goes into the final blend was aged in ex-oloroso sherry casks, imbuing the whisky with rich toffee and vanilla flavor. There are biscuits, dates, and baked apple in the mix, as well, with smoke and a hint of iodine on the lingering finish.

Glenfarclas can be challenging to pronounce, especially after a dram or two, but don’t let that deter you from going for it. This classic Speyside whisky is worth twisting the tongue over.

The rich amber-colored 17 is full-flavored and balanced, develops slowly, and brims with sweet malty notes and the intensely jammy flavor of a black mission fig—and with a touch of peat smoke and a hint of oak to boot. It combines the smoothness of the distillery’s younger whiskies with the depth of the older expressions.

Lest ye be mistaken for a whisky neophyte, remember that this single-malt scotch from the Inner Hebrides is pronounced “la-chayk” or even “la-chik” (“la-dayg,” on the other hand, sounds like a Bond villain). Ledaig, “safe haven” in Gaelic, is handcrafted at the Tobermory Distillery, the only whisky production facility on the impossibly colorful Isle of Mull. The Ledaig 1996 19 Years Old is what is often referred to as a “peat bomb,” crackling with smoky goodness from sniff to finish. And bless the ole malt master’s heart for all the other wonderful things at play in this whisky—toffee and seaweed on the nose, with apple, orange, and black pepper mingling on the palate. Finishes long, with peaty embers glowing.

The most celebrated of the five whiskies in the Lagavulin range is the stuff of legend, for peat’s sake. Peat, of course, is the lifeblood of Islay whisky, and there’s nary a dram produced on that scotch-soaked isle that is as peat-forward as Lagavulin 16. It’s a smoke show, simple as that. Okay, maybe not so simple. There’s a bit of sweetness to this whisky, and some seaweed and bacon notes, as well. Mouthfeel is slightly oily, the juice chewy. It’s the spiritual kin of the Shetland sweater—stylish, full of texture, and a source of great warmth.

The sixth commercially available version of this mythic whisky is an unpeated Islay malt aged 26 years in cask types Bruichladdich prefers to keep secret. What is manifest, though, is that Black Art  is an exceptionally rare and unique dram. The aromas are plentiful, among them raisin, apple, blackberry jam, brown sugar, and charred oak.

The vitality of the oak and the fruit is sensational. It’s a whisky that twists and changes constantly. Mysterious and inscrutable, it delivers an assortment of tastes that surprise and delight, from honeycomb to ginger-nut biscuits to tobacco. It is non-chill-filtered and bottled at a cask strength of 93.2 proof.

Oban (pronounced “OH-bin”) is a port town in western Scotland known as the gateway to the Hebridean islands. Its eponymous distillery, established in 1794, produces whisky with a flavor profile that straddles the smoky style of the Scottish islands and the livelier, more toothsome malts made in the Highlands. Oban 14 Years Old is a wee bit oily and quite a bit weighty. Smells like lemons and pears sprinkled with sea salt, set atop a table that had recently been on fire. Tastes like dried figs dipped in honey up front, followed by some oak and malt dryness. Begs to be paired with oysters and smoked salmon.

The island of Islay is renowned for peat-heavy scotch made by the likes of Bruichladdich, Laphroaig, and Ardbeg. The region’s most notable outlier is Bunnahabhain, where, since 1881, it’s produced exceptional whisky with nary a hint of peat influence. Bunnahabhain 25  is an exemplar of elegance and balance. Aged in ex-bourbon, scotch, and sherry casks, it offers aromas of polished leather, rich dried fruits, and spiced oak. Primary flavors are sweet berries, roasted nuts, and cereal, with a touch of sea salt on the finish. In 2010, Bunnahabhain upped the proof from 86 to 92.6, providing an extra measure of oomph to this world-class whisky.

Every February, for as far back as anyone can recall, the folks at Aberlour in Speyside have been emptying a bottle of whisky into the River Spey to “bless” the beginning of salmon fishing season. And wouldn’t you know it, the salmon haven’t once raised an objection. A’Bunadh is Scottish Gaelic for “of the origins,” a nod to Aberlour’s founder, James Fleming. This full-bodied, creamy expression is produced one batch at a time and matured exclusively in first-fill oloroso sherry casks.

The nose offers mixed spices, praline, and citrus zest. On the palate is a cornucopia of bright fruit flavor spiked with ginger and dark chocolate. It’s bottled at cask strength, which hovers around 122 proof, varying slightly from cask to cask. Truly a game changer in the whisky world, Aberlour A’Bunadh ($100) has commanded a cult-like following since it was introduced in 1997.

The inimitable David Stewart has been at The Balvenie going on 60 years. He’s the longest-tenured and most highly decorated malt master in the business and has had a hand in the development of some legendary whiskies, from the Tun 1401 series to the DCS Compendium, a collection of 25 handpicked casks curated by Stewart that include vintage single malts spanning his illustrious career.

But of all the whiskies he’s made, Stewart once told me, he’s most proud of DoubleWood 12 Year Old , which changed the way the industry approached spirit maturation. It’s aged in two types of barrels: American oak and European oak sherry. Today, virtually every whisky distillery in the world has similarly aged whiskies in their portfolio, but only one is the true original.

Of the many brilliant expressions produced by the Macallan, Triple Cask Matured 18 —arguably, of course—best exemplifies the identity of the brand’s core range: scotch that is exceedingly smooth, elegant, and adorned with disparate tastes that somehow come together in perfect harmony.

Dominant flavors include rich dark chocolate, dried coconut, and orange, with subtle notes of vanilla, nutmeg, and wood smoke. Best enjoyed neat with a side of toasted marshmallows dipped in Pedro Ximénez sherry.

How to Have the Best Valentine’s Day Ever