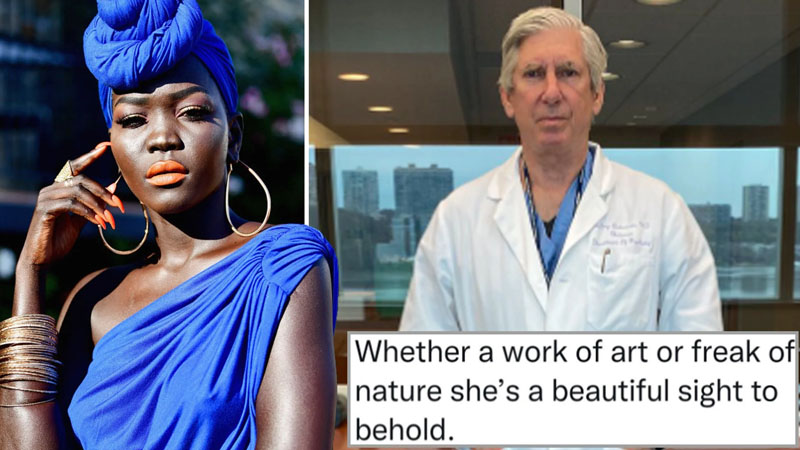 The head of Columbia University’s psychiatry department has been suspended after putting his foot in his mouth. Dr. Jeffrey Lieberman, one of the country’s top psychiatrists, caused outrage on Twitter after re-posting a picture of model Nyakim Gatwech and writing, “Whether a work of art or a freak of nature, she’s a beautiful sight to behold.”

To make matters worse, Dr. Lieberman was retweeting a message that incorrectly claimed Gatwech, who is of South Sudanese descent, is in the Guinness Book of World Records for having the darkest skin on the planet. He apologized to his colleagues by email after being suspended, stating he was “deeply ashamed” of what he said.

“An apology from me to the Black community, to women, and to all of you is not enough,” Lieberman wrote in the email according to The New York Times. “I’ve hurt many, and I am beginning to understand the work ahead to make needed personal changes and overtime to regain your trust.”

He has also lost other high-ranking positions in addition to being suspended. Lieberman’s job as psychiatrist-in-chief at Columbia University Irving Medical Center/New York-Presbyterian Hospital has been removed. He resigned as executive director of the New York State Psychiatric Institute on February 22, 2022.

“Coming from somebody with so much power, that was so disappointing. I was like, this is straight-up racism,” Gatwech told NBC New York.

She also confirmed the false Guinness claims in a lengthy Instagram post, claiming that she and Guinness World Records had attempted to remove the false record.

“I have no idea where it originated, but my manager first brought it to my attention in 2020 and although we’ve denied it to multiple fact-checkers, clearly it’s still floating around even after @guinnessworldrecords stated that it does NOT monitor skin tones,” Gatwech wrote under a screenshot of the now-deleted tweet. “I can’t imagine it’s even possible to know who’s the lightest or darkest person on the planet.”

Donald Trump plotted fake electors scheme: “We will show evidence of the president’s involvement in this scheme”