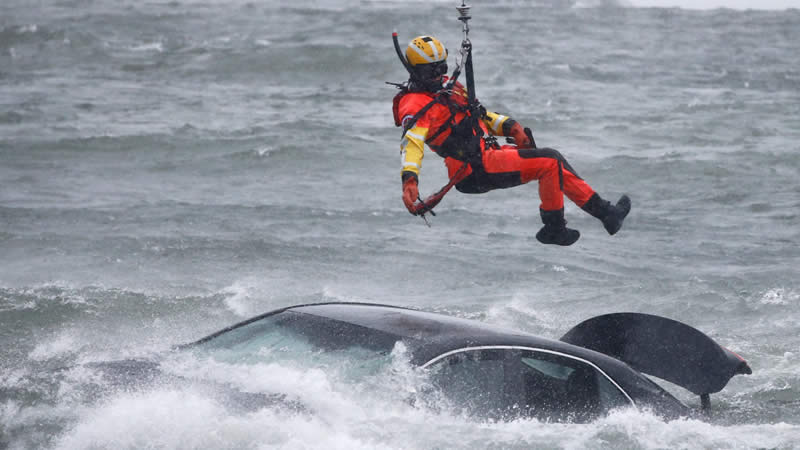 A Coast Guard helicopter crew braved poor visibility and frigid rapids to reach a car partly submerged in water on the edge of Niagara Falls, then lowered a rescue swimmer who took out the woman trapped inside. She didn’t make it.

“We have never had a vehicle in the water this close” to the edge of the Falls, as per Cpt. Christopher Rola of the New York State Park Police.

Petty Officer 2nd Class Derrian Duryea, wearing an orange suit and holding an axe in his left hand, was shown on video being buffeted by winds and spraying water as he was lowered 80 feet to the car through the falling snow. He was able to grasp hold of the passenger side and open the door after slowly turning and swinging past the car.

“As I was coming down I was just really focused on how am I going to get in this car when there’s, you know, pretty much rapids coming over the car right next to Niagara Falls,” Duryea said by phone later after returning to Selfridge Air National Guard Base, northeast of Detroit, where the crew is stationed. “My sole focus was which window or door am I going in.”

“Luckily, the car was unlocked and I didn’t have to break out any windows and I was able to open up the passenger side door and push it up against the current,” he said.
Throughout the operation, Lt. Chris Monacelli, the helicopter’s pilot, and flight mechanic Jon Finnerty kept a wary eye on the waterfall’s icy mist as it coated the hovering aircraft, including the windows, further limiting what they could see.

“A lot of bigger planes have deicing capabilities, but we don’t,” Monacelli said. “We have a lot of discussions and training for what we’d do if we got into that situation because if you do accumulate enough ice on the helicopter, it will fall out of the sky.”

Duryea emerged from the car about two minutes later, with water surging around the vehicle and over the brink of the falls about 50 yards downstream, and signaled for Finnerty to hoist him and the motionless driver, a woman in her 60s, from the water.

“The current was ripping pretty good through there and the car was close to the edge of the falls. If it moved, we didn’t want him getting dragged out with it,” Finnerty said.

It was unclear how the car ended up in the Niagara River. Witnesses said they saw it floating near a pedestrian bridge, where it was believed to have fallen. The roads in the area were slippery.

Snow limited visibility to a half-mile for the Coast Guard crew that had gathered for a training flight in Lake St. Clair, Michigan when they were dispatched to Niagara Falls, New York.

“At one point we were literally just flying down a street because we saw the road and we were trying to avoid the windmill farm that’s just west of Niagara,” Monacelli said. “So we’re flying the road as these gigantic windmills are popping up like a half-mile away from us.”

After the rescue, the car was almost fully submerged in the rapids upstream from the American Falls, one of three waterfalls that make up Niagara Falls, with only a part of the roof and open trunk hatch visible. Onlookers watched as rescue personnel prepared to pull the vehicle from the water.

The driver, according to authorities, lived in the area. Her identity was withheld pending notification of her relatives.

According to Capt. Rola, his department’s swift-water rescue teams were unable to reach the car due to its location. A drone was used by police to determine it was occupied.

“It was an incredible job by the Coast Guard,” Rola said.

Investigators would try to determine whether the vehicle ended up in the water by accident or on purpose, he said.

Niagara Falls has a history of attracting both daredevils and those driven by suicide by plunging over the falls in homemade contraptions.

US Pastor Loses Ministry after Performing in Drag on HBO