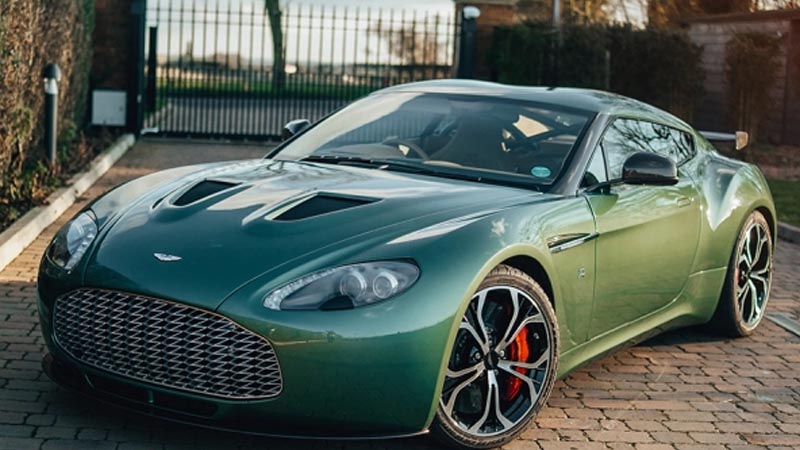 The pre-production prototype is the only version of the car made with a body made solely of aluminum.

The 2012 Aston Martin V12 Zagato coupé is an extremely rare vehicle, with only 64 ever produced. Now, the rarest variant of that limited-edition car—the only prototype with a body made solely from aluminum—is up for sale.

A one-of-a-kind pre-production prototype of the V12 Zagato coupé has just been listed by UK-based rare car dealership, Bell Sport & Classic. But even if it weren’t the only aluminum-bodied Zagato, the gorgeous green racer would likely pique the interest of any serious collector, especially those with a penchant for British automobiles.

Originally unveiled at the 2011 Concorso d’Eleganza Villa d’Este in Cernobbio, Italy, the coupé, a collaboration between Aston Martin and coachbuilders Zagato, was made to celebrate the 50th anniversary of the DB4GT Zagato. A true beauty, the car claimed the “Design Award for Concept Cars and Prototypes” at the event and would go into production shortly thereafter. Based on the V12 Vantage, the model features a sleek carbon fiber and aluminum body and is powered by a 5.9-litre AM11 V12 engine mated to a six-speed manual transmission that’s capable of churning out 510 horses and 420 lb-ft of torque.

The aluminum-bodied example is one of two pre-production prototypes produced by Aston Martin and used for events and special customer viewings around the world. Originally painted Titanium Grey, the car has since been finished in the company’s trademark Racing Green. It has also undergone a subtle interior makeover and features an engine plaque that reads “No. 2 of 2.” The vehicle was also owned by Aston Martin until 2016, before being sold to one of the automaker’s clients. Any way you look at it, it’s an ultra-rare example of an already exclusive vehicle.

“We are very pleased to offer for sale this truly unique Aston Martin V12 Zagato,” the dealer’s managing director, Tim Kearns, said in a press release. “All of the cars in the limited run of 64 are, of course, very special indeed, but this outstanding example is one of only two pre-production cars and the only fully aluminum-bodied model ever made. It has been treated to a meticulous recommissioning by Aston Martin itself and would be a wonderful addition to any collection.”

If you’re interested in adding the sporty racer to your collection, you can register your interest with Bell Sport & Classic now. Pricing is only available upon request, but owing to the car’s rarity, you can expect the price tag to soar well above the car’s $500,000 original cost.

Parenting During A Pandemic