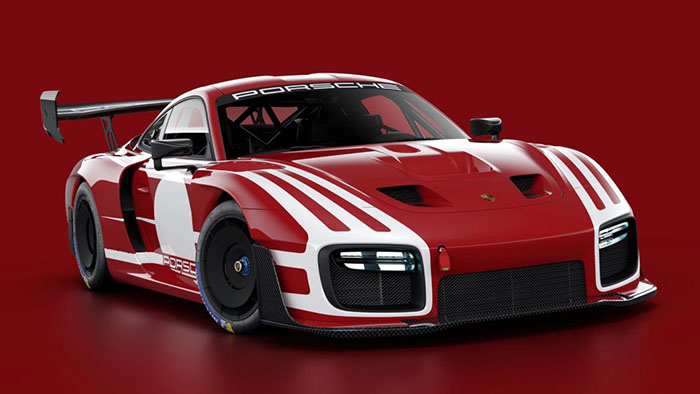 In addition to the amazingly retro liveries you see in the gallery above, Porsche has also shown off its upcoming 935 in bare carbon fiber. We’ve embedded the Facebook post with a few shots of the naked 935 just below.

So, again we ask, which is your favorite?

Porsche is building 77 examples of the new generation 935, itself an homage to the “Moby Dick” racecar of the mid-1970s. Since the car looks like a throwback to the ’70s, it’s only fitting that any liveries it would wear would also be in the correct retro style. And that’s exactly what Porsche has done: the manufacturer is offering seven different motorsport themes on the new 935, and they’re all glorious. There are two different red liveries for the 935: the Salzburg with white stripes and the Momo with yellow stripes. The Salzburg theme refers to the colors of the 1970 24 Hours of Le Mans-winning 917 team, and the Momo Racing theme brings to mind a winning 935 driven by Moretti.

The black themes are also very cool, and the John Player Special one with gold accents hardly needs explaining – it’s one of the first late ’70s style color packs we think of, and it suits Porsches and Lotuses alike. The Interscope livery with orange highlights was originally worn by the Garretson/Redman car that won the 1981 Daytona 24 Hours. As well as the JPS colors, the famous Kremer Racing team also wore the white-and-blue Sachs theme, as well as the super-cool mint green Vaillant livery. Lastly, one of the most deserving inclusions is the orange-over-blue Gulf livery, memorably worn by Wyer cars.

Still, we’d say the iconic red/white/blue Martini livery the new 935 wore when it was revealed might be its best. Whatever the hues of the new 700-horsepower, GT2 RS-based limited edition car, it won’t be cheap – it’ll set you back over $817,000 if you’re one of the 77 lucky buyers.

The Best Japanese Whiskies You Need to Know