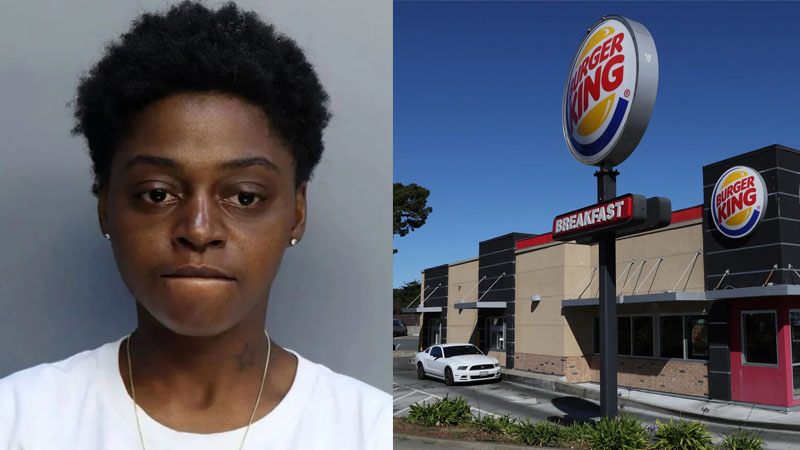 When Shateasha Hicks started working at a Burger King in Miami, she didn’t get the “have it your way” memo. When a customer threw a mayonnaise packet at her last week, the 30-year-old employee took it personally, according to cops. In fact, she was so concerned about her life that she went outside, pulled out a gun from her car, and fired five rounds as the now-mayo-less customer drove away.

Instead of staying to speak with the police, she drove away, ditched her car near her house, and disappeared into the unknown. Miami cops apprehended Ms. Hicks the next day at her home and arrested her on a single charge of discharging a firearm in public. Meanwhile, the media visited the same house and spoke with Hicks’ aunt, who assured them that Shateasha was acting in self-defense.

The reporter speaks to Shateasha Hicks’ auntie. Screen capture by Boch via YouTube. She was there. She was protecting herself. I don’t blame her. Everybody else might, but I don’t,” Hicks’ self-described aunt told the reporter.

In Hicks’ defense, a witness said the customer was making faces at her, further aggravating the situation. “And that just set her off,” the witness helpfully added. While the video is suitable for work, it is not suitable for drinking while watching.

Here’s the story, from MSN News: An incident occurred at around 4 p.m. on Thursday when a customer came through the drive-thru of a Burger King in northwest Miami-Dade. Local station WPLG reported that witnesses saw the employee, identified by police as 30-year-old Shateasha Hicks, arguing with the customer.

The customer allegedly threw mayonnaise back at Hicks before driving off.

Witnesses then recount to WPLG that Hicks was seen running out of the restaurant to her car, before pulling out a gun and shooting at the customer’s car as it drove away. Police said she shot a total of five rounds.

Hicks was released on bond about 48 hours after her arrest.

Clearly, Ms. Hicks is unaware when it comes to the sensible use of lethal force. Unfortunately, I know that many other gun owners aren’t as knowledgeable about self-defense law as they should be. Here’s a primer for those interested in learning more.

In the case of Burger King, MSN News provided a helpful summary of recent mayhem involving perforated people at their places. It appears that people shooting guns at Burger King occurs on an alarmingly regular basis.

Unfortunately, a few of these fast-food restaurant incidents have ended in casualties. In January, a teenage employee at a Burger King in East Harlem was shot and killed during an armed burglary.

In the same month, another teen was shot and killed during an attempted armed burglary of another Burger King in Milwaukee. Authorities believed that the 16-year-old employee was involved in staging the robbery that ultimately ended her life.

In Wisconsin, two sisters are facing homicide charges for allegedly shooting a restaurant server in the face in January following an argument over food service.

Seems “have it your way” means something entirely different to some folks. Why is it this stuff never seems to happen at Chick-fil-A?

The Best Appetite Suppressant To Take Without Prescription

Baby Diagnosed With Extremely Rare Genetic Condition That Has No Cure