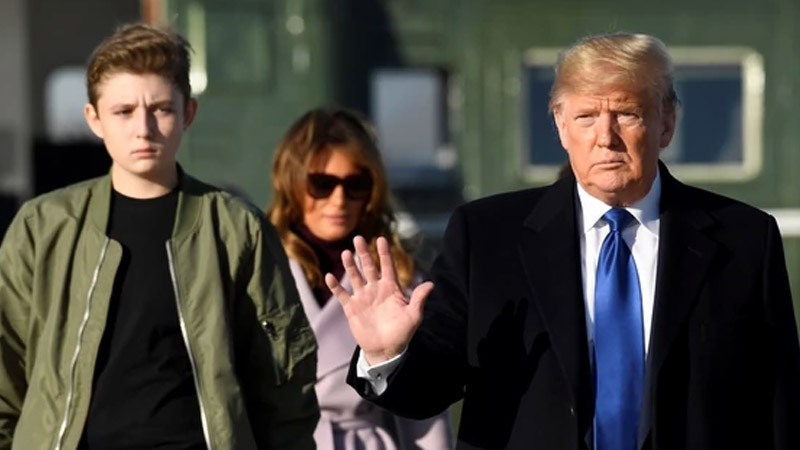 A viral photo has sparked interest on various social media platforms, including Twitter. Barron Trump towers over a woman in this photo, indicating his height. Barron Trump is the youngest son of former US President Donald Trump and the only child of Donald and his third wife, Melania Trump.

When this photo went viral, many people were surprised to see that the 16-year-old was much taller than his father and mother. Let’s delve deeper into Barron’s recent years, including the period when he grew from a child to a towering teenager.

Barron made history when he became the first son to live in the White House since JFK Jr. Presidents Bill Clinton, George Bush, and Barack Obama were all fathers to daughters before Trump.

Barron, unlike his older half-siblings, has been in the spotlight after a photo circulated via social media, raising concerns about his height. His famous Twitter photo was released on Father’s Day in June 2022, despite the fact that it was taken on Mother’s Day in May 2021, according to Reddit. According to the New York Post, Barron, who stands 6 feet 7 inches tall, has inspired people to use hashtags such as “New Trump Tower” and “Barron Trump.”

Barron speaks English and Slovene fluently because his mother is Slovenian. He was frequently seen in public with his parents, particularly when boarding and disembarking Air Force One when Trump was president. He was recently seen attending the funeral of Donald Trump’s first wife, Ivana Trump.

How tall are Melania, Donald, and Barron Trump? And where does Barron get his height?

According to Medical News Today, the primary factor influencing one’s height is genetic makeup or DNA. Everyone is born with the genes that determine the height, which determines how tall they will become. In most cases, DNA accounts for 80% of a person’s height.

Nutrition, underlying medical conditions, and hormones are all factors that affect height. In humans, approximately 700 genes control height, making it difficult to predict one’s exact height. According to some research, complete nutrition during development may result in taller children. A person’s stature continues to grow until the age of 18.

Does Meghan Markle Foresee a Relationship With Royal Family in the Future?