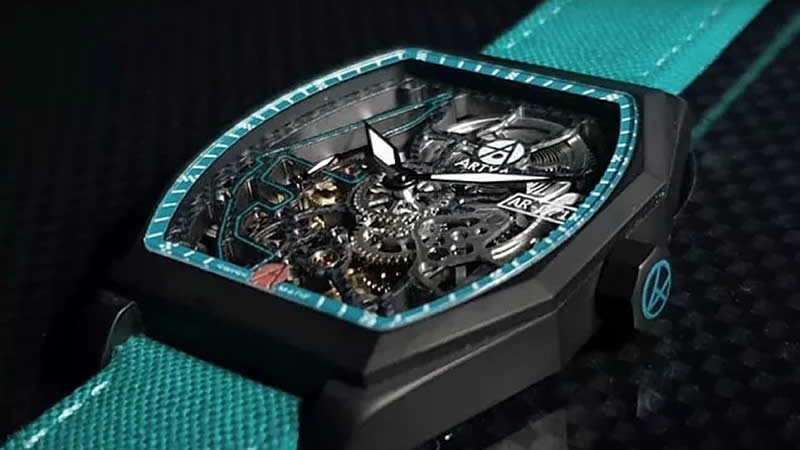 The Yas Marina circuit, which traditionally closes the Formula 1 world championship, inspires watchmakers. The Swiss watchmaking house ArtyA has produced a special series that celebrates the prestigious circuit and the 50th anniversary of Abu Dhabi where it is located.

​ArtyA is an independent house apart in the watchmaking world, discovered at “Montres et Merveilles“, the exceptional Parisian watch boutique created by Michel Fréret-Roy. It was founded in 2010 by Yvan Arpa, an atypical watchmaker who likes to shake up watchmaking codes. This can be seen in his totally avant-garde and unbridled creations produced in very small series. It pays homage to the automobile with the “Race” collection, the watches of which are distinguished by the reproduction of a rim suspended above the dial which turns at full speed when making a move, which allows hour visible!

​ArtyA has just unveiled the Abu Dhabi Formula 1 Circuit Limited Edition special series which responds to an order received from the Royal Palace in Abu Dhabi to celebrate the 50th anniversary of the capital of the United Arab Emirates. This city hosted the last round of the 2020 Formula 1 season on the famous Yas Marina circuit. The Abu Dhabi Grand Prix traditionally comes to close the world championship which it entered in 2009. It is nicknamed “the Grand Prix of the setting sun” because it is the first race in the history of F1 to end. by night.

At an exceptional great price, exceptional watch! The ArtyA Abu Dhabi Formula 1 Circuit is a piece of fine watchmaking distinguished by the spectacular work carried out on the movement and its chromatic presentation. The watch thus adopts the emblematic turquoise color of the circuit, called “Yas blue”, which is enhanced by the black DLC treatment of the barrel-shaped 316L steel case. It is found on the flange reproduced on the anti-reflective sapphire crystal, the crown, and the two straps available in technical fabric and rubber.

But above all, what immediately catches the eye of the motorsport enthusiast is the faithful reproduction of the circuit (and its 21 corners) appearing to float above the movement. It is made with a luminescent turquoise lacquer delicately added by hand which allows the circuit to light up in the night!

The dial has been removed to provide a detailed view of the watch engine. You can admire the quality of the skeleton work that has been meticulously carried out on the caliber AR-071. The bridges recall the world of Formula 1 with their “carbon fiber” treatment. We can thus observe each gearing in motion, such as the balance at 6 o’clock, and the interactions between each component. The barrel is used here to symbolize the setting sun of Abu Dhabi. The Manufacture has favored manual winding so that the view through the case back is not hidden by an oscillating weight. The caliber offers a comfortable 50-hour power reserve.

The ArtyA Abu Dhabi Formula 1 Circuit watch is a limited edition that will only be produced in 99 pieces. At the end of the year, the Swiss house is offering a prestigious and exceptional watch that perfectly matches the image of a circuit that holds a special place in the Formula 1 championship.