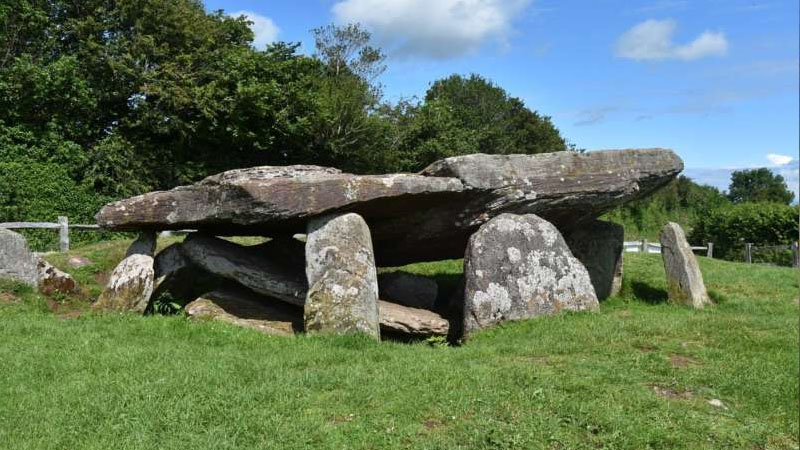 In an effort to shed some light on the mysterious site, archaeologists from The University of Manchester have begun a dig at a 5,000-year-old tomb connected to King Arthur.

In order to expose and record particularly fragile archaeological relics, the specialists are collaborating with English Heritage, which is responsible for maintaining Arthur’s Stone in Herefordshire, to remove turf.

Although English Heritage reports that similar instances in the same area have been found to contain fragmentary skeletal remains of numerous persons, along with flint flakes, arrowheads, and pottery, Arthur’s Stone is a Neolithic chambered tomb that has never before been explored.

Only the massive stones from the inner chamber are still visible today, and they are set in a pile of stones and soil whose size and shape was unknown in the past. Nine upright stones make up the chamber, which is topped by a massive capstone that is thought to weigh more than 25 tonnes.

This tomb has a history of association with King Arthur dating back to before the 13th century, much like many other prehistoric sites in western England and Wales. Legend has it that King Arthur slew a giant here, leaving the imprint of his elbows as he landed on one of the stones.

More recently, it is believed that the place inspired C.S. Lewis to create the mythical Narnia; the stone table upon which Aslan the Lion is sacrificed in “The Lion, The Witch, and The Wardrobe” was modeled after Arthur’s Stone.

“Arthur’s Stone is one of the country’s most significant Stone Age monuments, and this excavation gives a really rare and exciting chance for members of the public to come and see archaeology in action,” said Ginny Slade, a volunteer manager at English Heritage. “Our team of wonderful volunteers will be on hand to explain the latest findings as they happen—we’re asking people to book in advance to make sure everyone has a chance to enjoy this great opportunity.”

As per phys.org, the excavation follows studies conducted by the Universities of Manchester and Cardiff last year just to the south of the monument, which has already altered perceptions about the site’s orientation and history.

However, Manchester’s Professor Julian Thomas and Cardiff’s Professor Keith Ray discovered that the monument originally extended into a field to the southwest and may have taken the form of a low turf mound with rounded ends. It was previously believed that Arthur’s Stone stood within a wedge-shaped stone cairn, similar to those found in the Cotswolds and South Wales. The forthcoming excavations will be directed by Professors Thomas and Ray as well, with Cardiff University students and representatives from a number of American institutions taking part.

In addition, a group of volunteers has been assembled by English Heritage to assist the archaeologists in giving tours of the dig site that will bring the history and legends of the stones to life. Pre-booked tours are available to book online now.

Sleeping while standing is possible now with a Strange Vertical bed