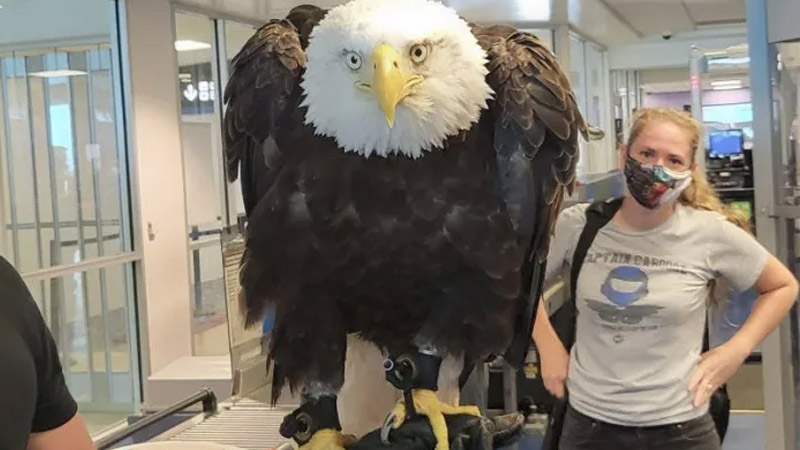 Clark, a bald eagle, was seen returning home on Monday after making a special appearance at High Point University’s convocation on Sunday in North Carolina.

@ElijahWhosoever on Twitter shared a video of Clark passing through the TSA checkpoint at Charlotte Douglas International Airport, which has since received over 120,000 views.

According to Yahoo News, Clark was bred in the conservation department of the World Bird Sanctuary in Missouri 20 years ago, according to the organization’s website. According to the website, he was supposed to be released into the wild because the species was endangered at the time, but due to Clark’s foot deformities, he was unable to join his siblings in the wild.

“Clark’s feet would not be properly protected from the cold during the winter, and he would suffer from things like frostbite and loss of toes,” the organization states.

After some users questioned why Clark was allowed to enter the TSA checkpoint, High Point University tweeted its support for him.

“He flew over the heads of our largest freshman class this past Sunday at Convocation, our official welcome ceremony for the newest HPU class, symbolizing the beginning of their HPU experience,” a cheeky tweet by the university read.

Clark has been a flying ambassador for the World Bird Sanctuary since he lives in captivity and has been trained for special appearances and events.

Clark’s impressive resume, as listed on the World Bird Sanctuary’s website, includes flying overhead during the national anthem at St. Louis Cardinals baseball games and making appearances at Chicago Bears football games. Clark can be rented for any and all types of events for anywhere between $29 and $129, according to the website.

TSA regional spokesperson Mark Howell shared photos of Clark on the official TSA Southeast region Twitter page Wednesday. “TSA officers are used to seeing an eagle on their uniform as they look over their shoulder, but I’m sure the team at @CLTAirport Checkpoint A did a double take when they saw a real one earlier this week,” Howell wrote

Southwest Airlines spokesperson Tiffany Valdez told The Washington Post that the airline works with animal organizations on a “case-by-case” basis to make special exceptions and allow certain animals to fly.

US intelligence chief says documents recovered from Mar-a-Lago are being assessed for damage: report