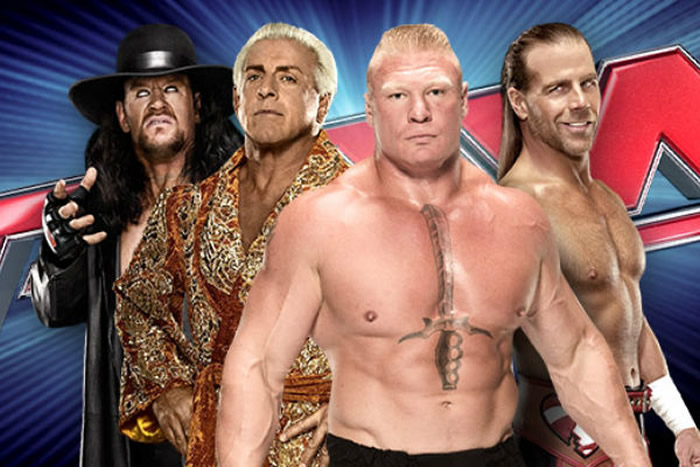 WWE Monday Night Raw is back with a new live 3 hour show tonight, eminating live from Dallas Texas, the site of Wrestlemania 32. This is the “go-home” edition of Raw for the Hell in a Cell 2015 PPV and WWE has announced a loaded lineup of current and former stars for the show.

Brock Lesnar and The Undertaker are confirmed officially to be on the show to promote their Hell in a Cell match this Sunday. Shawn Michaels and Ric Flair are advertised to appear on the show as returning legends. While nothing has been officially confirmed for their roles on the show, it’s expected that they will be involved in an in-ring “panel” of sorts, predicting the outcomes for the Hell in a Cell match between Brock and Undertaker. After Raw, WWE Network will have the next edition of the Stone Cold Podcast – where Steve Austin will be interviewing Brock Lesnar live on the air. When Paul Heyman appeared on the Stone Cold Podcast, Austin teased a Wrestlemania 32 match against Brock, but has in recent weeks killed that rumor on Twitter.

Things tend to get out of hand quickly whenever The Undertaker and Brock Lesnar are within punching distance of each other, and the final Raw before their climactic clash inside Hell in a Cell should be no different. Will we see The Beast and The Phenom tear each other apart, six nights removed from their career-threatening war within the unforgiving steel? Which of these battle-hardened gladiators will seize momentum before turning the page to their “Final Chapter” on Sunday?

John Cena will be on the show, and will likely hold another US Title Open Challenge. Last week he defeated Dolph Ziggler who showed subtle heel signs. Will there be more to this feud? Hell in a Cell is expected to be Cena’s last WWE appearance for a few weeks so this is the last time Cena will be on Raw until later in 2015 or even 2016. Bray Wyatt vs. Roman Reigns is the other Hell in a Cell match for the Hell in a Cell 2015 PPV. For Raw, Bray Wyatt has promised that he would unveil a “prophecy” for Roman Reigns on Raw The Divas Revolution will continue, centered around the Charlotte/Nikki Bella rematch, as well as the attack backstage on Natalya.

Here is the WWE.com Five Points Preview of the show: