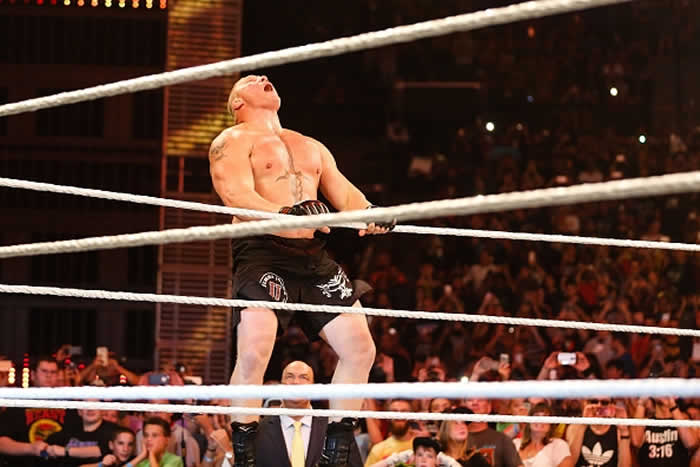 The second annual WWE Fastlane pay-per-view on Feb. 21 at the Quicken Loans Arena in Cleveland, Ohio is less than two weeks away. Only four matches are announced for the event so far.

Dean Ambrose vs. Roman Reigns vs. Brock Lesnar in a Triple Threat Match

The winner of this match will face Triple H in the main event of WrestleMania 32. It was made official on this week’s episode of Monday Night RAW. As recapped by WWE.com, Brock Lesnar got the upper hand on Roman Reigns and Dean Ambrose during the contract signing, but “The Lunatic” was able to send a message to “The Beast” with a low blow later in the night.

Del Rio’s “League of Nations” faced Kalisto’s “The Lucha Dragons” this week on RAW in a tag team action with Del Rio getting the win by pinning Kalisto after hitting his double foot stomp finisher.

Charlotte (C) vs. Brie Bella for the Divas Championship

The match was made official last Monday on RAW in Seattle where Brie’s husband, Daniel Bryan, announced his retirement. Brie has the momentum going into the match, but according to Inquisitr, Charlotte is set to retain her Divas title. The rumor is that Charlotte will face Becky Lynch and Sasha Banks in a Triple Threat Match at WrestleMania 32.

Becky Lynch and Sasha Banks vs. Naomi and Tamina

This is another match announced on RAW this week, but Bleacher Report notes that it is just a way to have Lynch and Banks stay relevant heading to their rumored Triple Threat Match at WrestleMania 32 with Charlotte. Tamina was able to pin “The Lass Kicker” on this week’s episode of RAW while “The Boss” was able to submit Naomi during this week’s SmackDown tapings, per Wrestling Inc.

Styles was able to defeat Jericho in his debut match, but “Y2J” was able to get his revenge by pinning “The Phenomenal One” in their main event match on this week’s SmackDown tapings, as reported by Wrestling Inc. With the two superstars each with one win against each other, a third and final encounter is obvious to find out who is the greater superstar between the two.

The Wyatt Family vs. WWE’s ‘Titans’

Bray Wyatt cut a promo during the SmackDown tapings about taking out WWE’s so-called “Titans.” In the past few weeks, The Wyatt Family has taken out Kane, The Big Show and Ryback in the past few weeks that could lead to a six-man tag match at Fastlane.