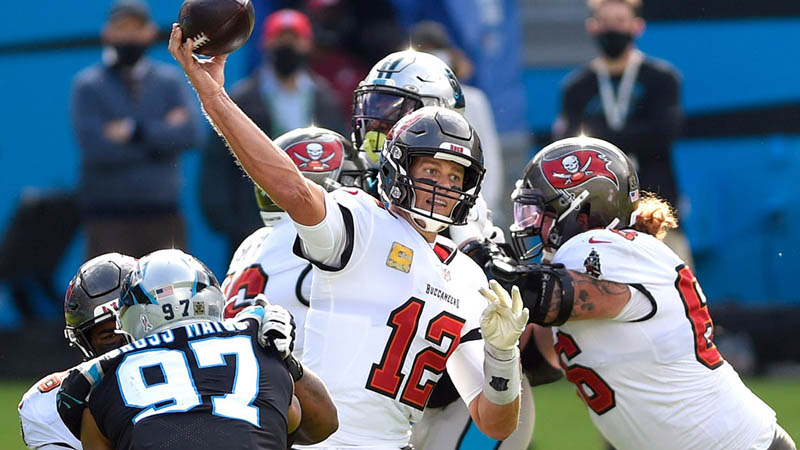 Tom Brady threw for 341 yards and was involved in four touchdowns, Ronald Jones had a franchise-record 98-yard touchdown run, and the Tampa Bay Buccaneers bounced back from a dreadful defeat with a resounding 46-23 win over the Carolina Panthers on Sunday.

Coming off the most lopsided loss of his illustrious career — a 38-3 defeat to the Saints — Brady threw touchdown passes to Cameron Brate, Mike Evans and Rob Gronkowski, then ran for another score in the fourth quarter to seal the win.

Jones’ run in the third quarter broke open a tight game. He raced up the middle behind left guard, shook off safety Tre Boston and was gone. Jones finished with a career-high 181 yards and became the fourth NFL player with a TD run of 98 yards or longer, joining Tony Dorsett, Derrick Henry and Ahman Green.

Chris Godwin had 92 yards receiving for the Buccaneers (7-3), who swept the season series and handed the Panthers (3-7) their fifth straight loss.

The Buccaneers arrived in Charlotte just before midnight Saturday after their team plane was delayed 6 1/2 hours because of mechanical issues. Jones fumbled on the team’s second play from scrimmage, leading to a Carolina touchdown. But Brady and company regrouped and was dominant the rest of the way scoring on nine straight possessions against a helpless Panthers defense.

Teddy Bridgewater threw for two touchdowns and ran for another before leaving in the fourth quarter with a right knee injury. P.J. Walker finished up at quarterback.

Despite the Bucs scoring a season-high 46 points, Brady was far from perfect.

The six-time Super Bowl champion missed open receivers on deep balls on three occasions, including his old buddy Gronkowski. Gronk was running alone down the middle of the field midway through the third quarter only to have the ball sail helplessly over his head. Earlier, Brady missed chances to hook up on long potential TD passes with Antonio Brown and Evans.

Panthers: Cornerback Donte Jackson left early in the third quarter after reinjuring his toe. Running back Mike Davis missed part of the second half with a finger injury, but did return.

People’s Choice Awards 2020 winners: See if your favourite made the list

Olivia Wilde & Jason Sudeikis call it quits after 7 year engagement? ‘Their children are the priority’: Report

Clemson to Suspend Four Players for Season-Opener Against UGA