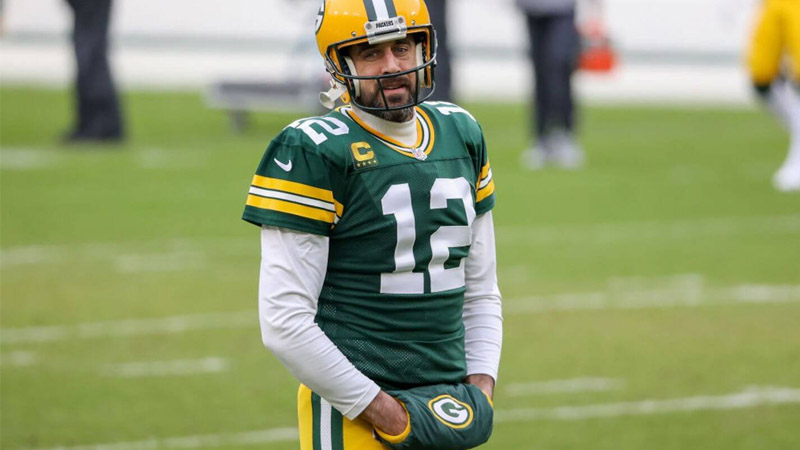 That’s according to ESPN Insider Adam Schefter, who claims Rodgers is “disgruntled” with the 2010 Super Bowl winners. Rodgers has been with the Packers since 2005, joining them as a first round draft pick from California Golden Bears.

The quarterback has been instrumental in the Packers’ success and has been voted league MVP on three occasions.

He’s third on the NFL’s all-time regular season career passing list and is synonymous with the famous green, white and gold. However, all is not well at Lambeau Field, and there’s a real chance Rodgers could quit the Packers in the off-season.

ESPN Insider Shefter tweeted: “Rodgers is so disgruntled with the Green Bay Packers that he has told some within the organization that he does not want to return to the team, league and team sources told ESPN on Thursday.”

The Packers are said to be aware of his feelings and are putting all their efforts into convincing Rodgers to stay. “As we’ve stated since the season ended, we are committed to Aaron in 2021 and beyond,” general manager Brian Gutekunst told ESPN.

“Aaron has been a vital part of our success and we look forward to competing for another championship with him leading our team.”
Rodgers is unhappy for a variety of reasons, with some of it stemming from last year’s draft.

The Packers didn’t inform the 37-year-old before drafting a quarterback with their first-round pick, a move which could be viewed as putting Rodgers’ place in the team under threat.

News of Rodgers’ uncertain future emerged at the same time San Francisco 49ers reportedly reached out over a possible trade for the quarterback.NFL Network’s Tom Pelissero explained that no offer had been lodged, but the 49ers were keeping tabs on the situation.

Pelissero also revealed information from a source that there was ‘zero percent’ Green Bay would consider letting Rodgers leave.

GEOMETRICAL CASA PREBARCO ON THE COAST OF CHILIE