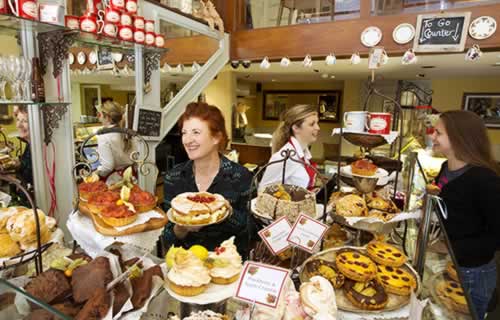 A widespread gourmet food movement got under way in the last two decades as top Irish chefs landed cooking shows and Michelin stars, revealing the culinary potential and generating enthusiasm. The result is a pervasive emphasis on quality local ingredients and artisan producers. Don’t be surprised to see the provenance of menu items listed: Skeaghanore duck, Clonakilty blackpudding, Castlemine Farm dry-aged beef. This made-in-Ireland approach extends to drinks too, with loyalties leaning toward local microbrews and gins produced with Irish botanicals.

Farmhouse Cheese
Cheese making dates back to the days of the monasteries here but nearly died out. It helped get the artisanal food movement going when it was reestablished in the mid-1970s by the makers of Milleens and Coolea cheese. Sheridans Cheesemongers, with shops in Dublin, Galway, and Kells, features over 50 Irish cheeses in a variety of styles from more than 30 artisan producers in the north and south. Sample before buying or head to the wine bar above the Galway shop for tasting platters to share. 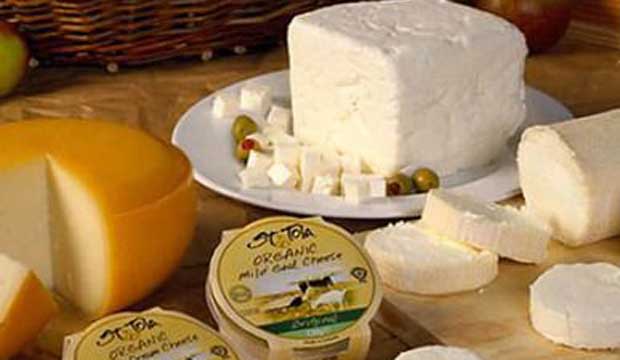 Dromoland Castle in Newmarket-on-Fergus offers an Irish cheeseboard at breakfast, and doubles the size to wind up dinner in its Earl of Thomond Restaurant. For an interesting cheesy creation, head to Gallagher’s Boxty House in Temple Bar, Dublin, for traditional boxty potato dumplings with lick-your-plate Cashel blue cheese sauce. Derry Clarke of Michelin-starred l’Ecrivain in Dublin presents Bellingham blue cheese mousse with black grape confit and pickled walnuts on his ten-course tasting menu.

Seafood
The bounty of the sea is celebrated in festivals and on menus across the island. One of the biggest festivals is the Galway Oyster and Seafood Festival at the end of September. Alternatively, sample Irish bivalves at renowned oyster bars in the Saddle Room at the Shelbourne Dublin and at Mourne Seafood’s Dublin and Belfast locations, serving oysters from County Donegal and County Down, Northern Ireland. Learn the secrets of the Mourne Seafood chefs in classes at the Belfast Cookery School. 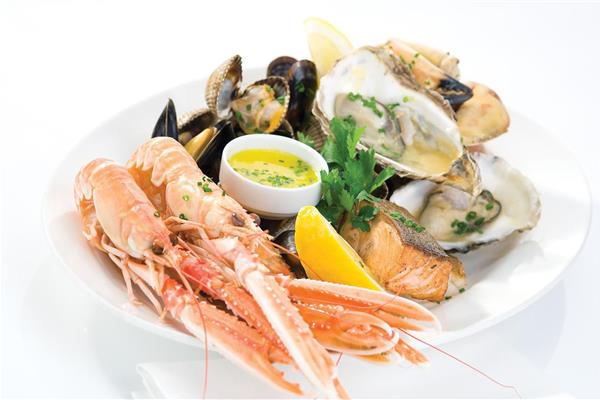 Award-winning seafood restaurants include The West in Westport, Mayo, the All-Ireland Chowder Champions for 2012 and 2013. Eithna’s by the Sea in Mullaghmore, Sligo, was named best seafood restaurant for 2014 by Georgina Campbell Guides. Chef Eithna O’Sullivan incorporates local seaweed into entrées, bread, and pesto sauce; her signature dish is lobster, most popularly served as Goan lobster curry. The waterfront restaurant has an undersea mural splashed across the façade.

Smoked Salmon
Ireland’s smoked salmon deserves its own category. Salmon has been eaten in Ireland since prehistoric times and ties into Celtic mythology—the Salmon of Knowledge was considered the wisest of creatures. Smokehouses around the island smoke salmon with oak, beech, or turf, and restaurants typically serve it as an appetizer with brown bread. Oysters Restaurant in Strabane, Northern Ireland, presents a creative twist with pistachio-crusted, peat-smoked Irish salmon with martini and chive velouté. 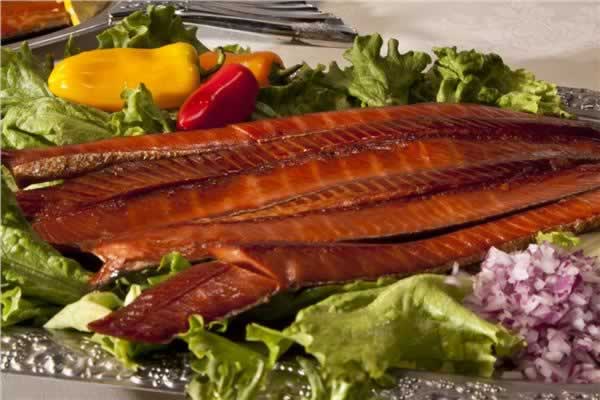 Ummera Smoked Products in Timoleague, Cork, offers certified organic smoked salmon produced with eco-friendly practices. It’s cured with pure Portuguese sea salt and Costa Rican cane sugar, then smoked over smoldering oak from sustainable forests. Connemara Smokehouse in Ballyconneely, also certified organic, employs a slow process to ensure flavor and texture, fanning beech wood smoke around the fish in the kiln for up to ten hours and storing it in a cool room for another 24 hours. Take their Wednesday smokehouse tour in the summer to see filleting, salting, smoking, and slicing firsthand.

Lamb
The Irish take pride in lamb from specific regions—Connemara Hill lamb even has geographical protection from the European Union. Mary Gleeson of Gleeson’s Townhouse & Restaraunt, Roscommon, says it’s the sweet, grass-reared Roscommon lamb that makes her stew so tasty and admired. She cooks it in fresh thyme and rosemary-flavored broth with onions, carrots, celery, and potatoes. The Roscommon Lamb Festival in May offers a chance to taste local lamb cooked a variety of ways.

Enjoy Wicklow lamb shanks cooked in red wine and rosemary along with musical merriment and Irish dancers at the Merry Ploughboy Pub in Rathfarnham. Castle Murray House in Dunkineely, Donegal, has a creative take on Donegal lamb, presenting roast loin and braised breast with confit aubergine and rosemary puree, morel jus, and smoked garlic foam. Air-dried lamb made by McGeough’s Artisan Butcher in Oughterard, Galway, is a flavorful, unique product. It’s marinated in herbs and spices, air-dried for at least eight months, smoked with beech chippings, and sliced thin like prosciutto.

Traditional Breads
Soul-sustaining bread is a staple for the Irish, notably soda bread with a cross cut into the top. The soda bread master is Peter Ward of Country Choice in Nenagh—heaps of his crusty round loaves are gone before day’s end. The northern specialty is oatcakes, with artisan baker Robert Ditty setting the standard at Ditty’s Home Bakery & Coffee Shop in Castledawson and Magherafelt, Northern Ireland. The Waterford blaa, a soft white roll dating to the 17th century, now has EU protected status. Third-generation bakers Michael and Dermot Walsh make fluffy blaas at M&D Bakery in

Waterford City
Great places to find artisanal bread include the Limerick Milk Market, Cork’s English Market, and St. George’s Market in Belfast. Look for small-batch butter and home preserves to go on it. If you want to learn to make bread yourself, take the ferry from Cunnamore Pier, West Cork, to Heir Island and roll up your sleeves for a one-day course at Firehouse Bakery Bread School with baker Patrick Ryan.

Teatime
Ireland drinks more tea per capita than any other place in the world except for Turkey. There are charming tearooms all over Ireland and Northern Ireland, as well as luxury hotels offering elegant high tea. Miss Courtney’s Tearooms in Killarney, County Kerry, has been family run since 1909 and features antique china tea sets, old-fashioned tablecloths, chandeliers, vintage party photos, and lovely treats. Miss Katie’s Tea Rooms near Blarney Castle specializes in imaginative cupcakes, while the Queen of Tarts in Dublin serves up signature Baileys cheesecake tart—made with Irish cream cheese and Baileys Irish cream—and so much more.

For formal high tea with three-tiered presentation, Lough Erne Resort in Enniskillen, Northern Ireland, can’t be beat with a table by the log fire, views over the lough, and celebrity chef Noel McMeel’s edible creations. If you’re a chocoholic, go for the Chocolate Afternoon Tea with a Death by Chocolate cocktail. Another impressive-yet-alternative option is the Art Afternoon Tea taken in the Georgian drawing rooms at The Merrion Hotel, Dublin. It features pastries that echo some of the hotel’s famous works of art.

Craft Apple Juice and Hard Cider
Gourmet drinks made with apples—alcoholic and nonalcoholic—are popular in Ireland. These small batch offerings are dry and crisp, not supersweet; some are infused with berries and other flavors. The hard cider is typically lightly carbonated. The Apple Farm in Cahir has a farm shop where you can buy apples, as well as sparkling apple juice, hard cider, and apple juice mixed with strawberry, raspberry, or blackcurrant juice. Kilmegan Cider in Dundrum, Northern Ireland, offers hard cider infused with wild elderflowers for a subtle floral finish.

Longueville House in Mallow, Cork, is an apple lover’s destination, as the Georgian mansion hotel has apple orchards on the estate. Owner William O’Callaghan makes hard cider and apple brandy that is double-distilled in copper pot stills then aged four years in oak barrels. Try the home-reared pork loin with cider sauce followed by apple tart with apple brandy ice cream and caramel sauce in the restaurant.

New Irish Gin
There are three newcomers to the gin scene that are made in Ireland with unique botanicals, infusing the spirit with the flavors of the countryside. Shortcross Gin, made by Rademon Estate Distillery in Downpatrick, Northern Ireland, launched in April, incorporating apples, elderberries, and wild clover with classic botanicals such as juniper. The aromatic, complex elixir has a long, peppery finish. It’s completely handcrafted, all the way to signing labels with batch and bottle number.

The Exiles Irish Gin launched in May and is the only gin in the world to include shamrocks. It’s also infused with honeysuckle flowers, red clover flowers, rowan berries and bog myrtle, and has floral and citrus notes. Dingle Original Gin made by Dingle Distillery incorporates fuchsia, heather, bog myrtle, hawthorn, and rowan berries, sourced locally where possible, in its lineup of 16 botanicals to give it the essence of the Kerry landscape. In its first year, it won a gold medal in the 2013 Irish Food Awards.

Microbrews
Although Guinness is pervasive in Irish pubs, there’s a microbrewery boom across Ireland and Northern Ireland, now counting about 40. You’ll be spoiled for choice with more than 200 craft libations at the Irish Craft Beer & Cider Festival in Dublin in September. If you’re an enthusiast, book a table at L. Mulligan Grocer in Dublin, which pairs each menu offering with a recommended craft beer or (for desserts) whiskey from their list of over 200 craft beers and 300 whiskies. Check out their unique cask beer offerings too.

A few microbreweries open for tours, such as Hilden Brewing Company in County Lisburn, Northern Ireland, the isles’ oldest independent brewery; O’Hara’s Carlow Brewing Company in Bagenalstown with tours on Friday afternoons; and Dungarvan Brewing Company hosting tutored tastings on summer Friday evenings. But the best way to get exclusive access to breweries not normally open to the public with tastings by the brewmaster—if you’re lucky—is on a five-day package trip taking in eight to ten breweries with Brewery Hops based in Dublin. Day trips are also occasionally offered.

Irish Whiskey
Irish whiskey is one of the fastest growing spirits in the world. There are nearly 200 whiskey expressions, including iconic brands such as Jameson and Bushmills, plus start-ups like Teeling Whiskey. Dublin’s Celtic Whiskey Shop stocks everything available, plus many rare bottlings, and you can sample some of them before buying. For a personalized, tutored tasting, allow whiskey expert John Moriarty at the Park Hotel Kenmare in Kerry to select your perfect lineup from the bar’s 200 selections.