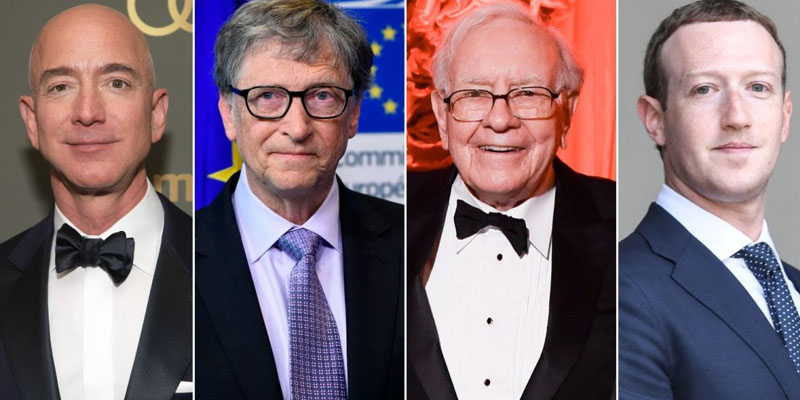 Successful people don’t sleep in. They wake up early, ready to attack the day. How early? It can range from 4:30 a.m. for Apple CEO Tim Cook to around 5 a.m. for Xerox CEO Ursula Burns to former Procter & Gamble CEO A.G. Lafley’s 5:30 a.m. wake-up call. Early risers have many advantages.

People who wake up early are also less stressed, because instead of rushing out the door, they take time for themselves and prepare for their day. Not a morning person? Gradually work on waking up early. For instance, wake up 15 minutes earlier for a week and then 20 minutes for the next week, and keep going until you reach your goal wake-up time.

I typically get up, meditate for at least 10 minutes using an app called Headspace, and then give myself time to drink tea, eat breakfast, and catch up on social media. It’s the one time of day I can be silent and allow my brain to relax before getting heavy into my day.

Read 500 pages like this every day. That’s how knowledge works. It builds up, like compound interest. All of you can do it, but I guarantee not many of you will do it.” — Warren Buffett
Disney CEO Bob Iger gets up at 4:30 to read, GE CEO Jeff Immelt reads the paper first thing in the morning. One of the most successful men in the world, Warren Buffett, starts his day by reading.

Buffett typically reads six newspapers each day: The Wall Street Journal, The Financial Times, The New York Times, The USA Today, The Omaha World-Herald and American Banker.Reading is so important to his success that Warren Buffett spends 80% of his day reading.Spend some time reading first thing in the morning.

Ask Yourself A Powerful Question

The late Steve Jobs, legendary innovator and founder of Apple, began each morning by asking himself one question: “If today were the last day of my life, would I want to do what I am about to do today? If the answer is ‘no’ for too many days in a row, I know I need to change something.”

You’ve probably heard that eating breakfast kick starts your metabolism, and that skipping breakfast is associated with weight gain. The former is certainly true, while the latter is open to some debate. However, skipping breakfast has a number of consequences. It may also make you feel less energetic, and thus expend fewer calories over the course of the day.

Eating breakfast has a number of important benefits, including a lower risk for diabetes (compared with those who skip it) and improved cognitive function. Breakfast isn’t just important for your body, but it’s necessary for your brain as well; your concentration and productivity are greatly improved when you eat in the morning.

What you eat is just as important as whether you eat. Sugary foods and other simple carbs, like white bread, can make you feel sluggish and case you to gain weight. So while it’s okay to indulge in pancakes or Fruit Loops once in a while, you shouldn’t make simple carb-heavy meals your go-to breakfasts. Instead, opt for protein- and fiber-loaded meals, which will give you energy, curb your appetite, and decrease your risk for some diseases. Examples of “good” breakfasts include eggs, oatmeal (not loaded with sugar), berries, nuts, or cottage cheese.

Exercising in the morning has a ton of benefits, including increasing your energy, boosting your metabolism, making you happier overall, and helping you sleep better. You don’t need to go for a long run to see some benefits — even just a few minutes of rigorous, aerobic exercise will yield results. You could even have a dance party, just like Shonda!

Your morning workout will also give you a sense of accomplishment and get you into a positive mindset for the day ahead.

Start Your Morning On a High Note

Mark Twain once said, “Eat a live frog first thing in the morning, and nothing worse will happen to you the rest of the day.” In other words, tackle your day’s toughest job early when your mental energy is at its highest. Choose only one “frog” of the day and complete it before your normal workday begins. My energy is highest in the morning, so that is when I tackle my biggest projects, but yours may be later in the day. Identify when your energy levels are at their peak in order to “eat your frog.”

Every day, you wake up with a new chance to improve and grow. People who have reached the top of their professions understand that how you begin your morning sets the tone for the rest of your day. Devoting yourself to a simple morning routine builds success for today and the days after.

Spend Quality Time With Loved Ones

Long hours at work may be good for your bottom line, but at what cost? Too much time at the office can take a serious toll on your home life and happiness. This is a common problem for entrepreneurs, small business owners, and anyone in between who is spending more time in the office than they’d like. Some morning routines of successful people address this common problem and aim to strike a balance between work and home.

Brad Feld, venture capitalist at Foundry Group, and Biz Stone, co-founder of Twitter and Medium, make sure to spend their mornings enjoying quality time with their significant others and children. A long list of other big names, including Richard Branson, Gary Vaynerchuk, and Jeff Weiner, agree that setting aside time to connect with loved ones is essential to their success, and more so, their sanity.

Importance Of Sex In A Relationship Secrets Revealed

Drinks That Can Help You Lower High Cholesterol

How Sleeping makes you Smarter