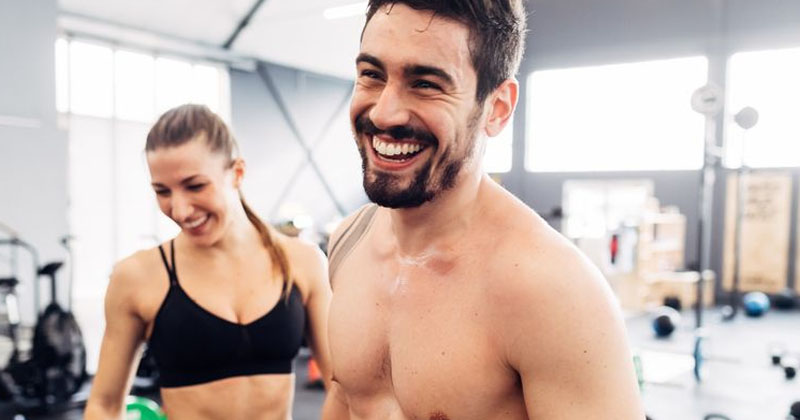 This newly omnivorous approach to staying in shape highlights an element that’s often missing from exercise programs. In the pursuit of ripped abs and flagstone pecs, many of us have lost sight of that most essential property of physical recreation—fun.

1. Quit Obsessing Over How You Look

Forty years ago, during the Pumping Iron era, fitness was defined by how you looked in a Speedo. If you didn’t have softball biceps and single-digit body fat, you had no business calling yourself fit. Today, says Kunitz, “most guys realize that getting super jacked and lean is difficult to do and takes years.”A recent NCAA analysis found that single-digit body fat is rare, even among elite athletes in their prime. For example: The average body fat percentage for running backs at the NFL Combine from 2006 to 2013 was nearly 12 percent. Indeed, extreme leanness and muscularity—the kind you see in supplement ads—is not only an unrealistic goal for most busy guys but also unnecessary for athleticism. Stop staring in the mirror and focus on performance instead. Work on nailing your first pullup, then your first five. Try cracking 21 minutes in a 5K, then 19. Conquer a 5.2 rock face, then a 5.3.

Consider the fitness journey of Scott Ferrara, 42, a teacher in Los Angeles. “In my 20s, my goal was to be as big as possible. I was in pain. I was eating 10 chicken breasts a day. It wasn’t enjoyable.” Ferrara eventually switched gears. He completed an Olympic-distance triathlon and then participated in numerous obstacle course races on the West Coast. Now that he’s more concerned about his finishing times than his arm circumference, he’s respecting his limits. “I check in to see what my body needs on a given day,” he says.

2. Do Anything But Nothing

Some fitness hucksters believe that certain approaches work because they resemble the activities of our forefathers. Nonsense, says Daniel Lieberman, Ph.D., a professor of human evolutionary biology at Harvard. “Prescribing fitness and diet regimens based solely on what our ancestors did is rife with logical problems… We also evolved to sometimes fight, lie, get anxious, age, and die.”  In fact, science suggests that you can get healthier, stronger, and fitter by following any plan regularly. The CDC recommends 150 minutes a week of moderate-intensity aerobic activity, along with twice-weekly muscle strengthening sessions. It’s not a high bar, but 76 percent of men don’t reach it, the CDC reports. That’s despite the fact that “moderate exercise” covers abroad array of activities, from jogging and yoga to martial arts and rock climbing. It even includes some activities many jocks might consider too easy. “Brisk walking on its own is great for health,” says David Katz, M.D., Ph.D., director of Yale’s Prevention Research Center. The best exercise, he says, is the exercise people actually do.

The simplest rule: do something every day. That’s not easy. For documentary filmmaker George Kunhardt, 29, that lesson came a bit later in life. “I was an athlete in high school, but when I got to college I partied a lot.” By the time he started his career, his weight was normal but his body was soft. That’s when Kunhardt discovered a CrossFit gym near his office. The key variables to its appeal were proximity and simplicity: He could walk there and do the workout that was posted on the blackboard. Now Kunhardt trains six days a week; his body is harder and he can bang out sets of 40 unbroken pullups. He’s rediscovered both his competitive fire and his love of fitness. “It’s my number one stress reliever. When I’m at the gym, I go to my happy place,” he says.

To a strength coach, exercise and training are as different as chalk and cheese. “Exercise is something you do today because of how it makes you feel today,”says Rippetoe. “Training is a planned process to achieve a result somewhere down the road.” Most gymgoers are exercisers, says Rippetoe. They might hit chest and tris on Monday, run a few miles on Tuesday, and shoot hoops on Thursday. Each workout bears little relation to the one before or after it, so their progress is minimal. Yes, it’s infinitely better than nothing at all. But to improve your performance at a particular activity, you need to program a performance increase for that activity consistently. “I don’t want my muscles to be confused,” he says. “I want them to know exactly how I want them to adapt.”

An effective exercise routine is shaped by specific goals—short-term as well as long-term—toward which every workout is a distinct stepping-stone. That often requires taking the long view. “Let’s say you want to run a 10K. You might have five obstacles you need to overcome before you can complete that goal,” says Alex Viada, C.S.C.S., of Complete Human Performance in Durham, North Carolina. You may need to address your mobility or body composition before you can start thinking about your running pace. But even if you have a long way to go, Viada says, just ask yourself what you can do now to bring each goal a little closer and make the big goal easier. Then get to work on that—consistently—one workout at a time.

Here’s the curveball: To make that progress, you need to take strategic recovery breaks. “A lot of activities that we think are helpful are not,” says Andreo Spina, D.O., a chiropractor and mobility expert. Among these are some of our favorite pastimes. When major league baseball coaches and trainers ask him how to prevent elbow injuries in their pitchers, Spina tells them, only half jokingly, “Have them play another position.” From baseball and basketball to swimming and track-and-field events, sports are “man-made” activities, Spina argues. Many of them place asymmetrical demands on the body. Tennis and squash, for example, tax one arm and shoulder while leaving the other mostly out of the action. Swimming works your upper body more than your lower, while running and cycling do the opposite.

The potential damage isn’t limited to knees and ankles. A study in the Journal of Applied Physiology revealed that the heart valves of lifelong runners showed elevated risk of failure. Sure, sports belong in your training program, but focusing on a single sport or activity—year-round, with no time to heal and rebalance—might hurt you. For most of us, the ideal strategy is a three-weeks-on, one-week-off plan. For three weeks, gradually increase your workload at your activity of choice. Do more sets, reps, and weight if you’re into strength training; more distance or speed if you’re a cyclist or runner; more height, speed, or difficulty if you’re a climber. Then ease off for a week and come back to focus on a slightly different microgoal.

“If you’re a runner, you might plan a block where you do hills, another where you do speed or track work, and another where you work on endurance,” says Matt Dixon, a former pro triathlete and the founder of purplepatchfitness.com.“Even that simple change of stimulus will yield bigger results than just working randomly,” he says.

5. Listen to Your Body

Sometime between his umpteenth acupuncture treatment and anti-inflammatory injection, Short got wise. “When you’re in your late 50s, you have to walk a fine line between pushing enough and pushing too far,” he says. He dropped the weighted burpees, hooked up with a trainer, and replaced running with rucking—walking with a weighted pack. He’s currently gunning for an injury-free, top 10 finish in a Spartan race. He’s training smarter. “So many guys my age get hurt and pack it in,” Short says. The answer isn’t to give up altogether; it’s to adjust your routine. Exercise is dose-dependent medicine—your body thrives on just enough of it. “Beyond a certain point, there is actually net harm from extreme exertion,” says Dr. Katz.

Dialing It Back Can Be Smart

How do you find the sweet spot? Make sure your workout feels like work. Lifting to “volitional fatigue,” the point at which you can’t do any more reps while maintaining good form, is a more significant factor in determining muscle growth than weight lifted or reps performed, a new study reveals. “As long as you work to fatigue, it doesn’t matter whether you’re lifting 125 pounds 25 times or 250 pounds eight times,” says study author Stuart Phillips, Ph.D., a professor of kinesiology at McMaster University. Hard work leads to progress, regardless of the load lifted. To determine when you’ve reached your limit on a workout or activity, try the toe-touch test: Before your workout and between sets (or sprints or rounds of golf or sets of tennis), bend forward and reach for your toes. “If the movement you’re performing agrees with you, you’ll find that your range of motion will increase,” says David Dellanave, C.S.C.S., a Philadelphia strength coach. Feeling looser and being able to reach farther means your body is green-lighting that exercise. If, on the other hand, you get tighter (you can’t bend forward as far), then adjust, move on to a new exercise, or towel off and head home.

8 Ways to Flirt Without Saying a Single Word

10 Ways to Save Your Marriage From Divorce

6 Dumbbell Exercises for Your Glutes