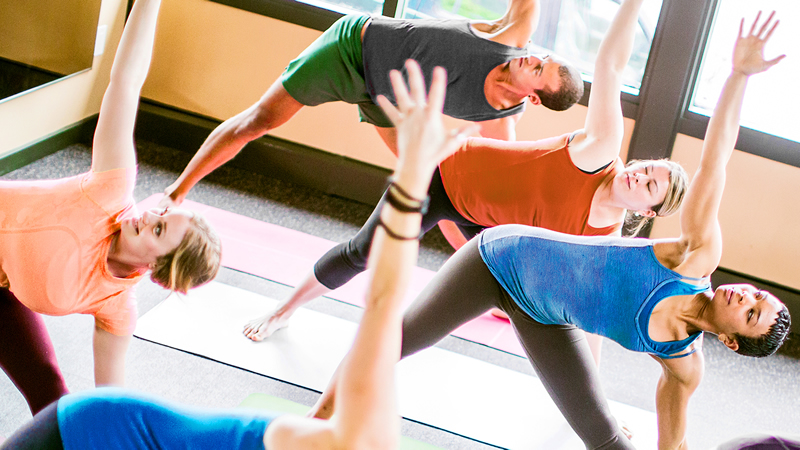 Hatha yoga has become one of the more popular types of yoga because it can build strength, improve flexibility, and align posture – while still being gentle enough for most bodies.

“If you’ve been to a yoga class, you likely practiced hatha yoga,” says certified yoga instructor Adrienne Leslie. “It’s a great option for both beginners and experienced yogis. The instructors will cue the breath and guide you into proper alignment in the poses, and the poses can be modified based on the experience level of the practitioner.”

Here’s what you need to know about the history and health benefits of hatha yoga, and what you can expect if you’re thinking about taking a yoga class.

Understanding hatha yoga and its origins
Most of the yoga classes you’ll find at local gyms and yoga studios can be classified as hatha yoga, where you’ll do a combination of poses and breathing exercises.

Hatha yoga translates to “discipline of force” in Sanskrit. It is rooted in ancient Hindu spiritual teachings and wasn’t officially introduced to America until the late 1800s, when Indian yogi Swami Vivekananda brought it to Chicago.

In the early 1960s, Richard Hittleman’s popular TV program Yoga For Health introduced hatha yoga to families across America. The practice gained even more steam later in the ’60s with the rise of the New Age and hippie movements.

Today, hatha yoga is recognized for both its mental and physical health benefits and can be found in tens of thousands of studios throughout the US.

Important: Hatha is the physical practice of yoga paired with breathwork. Other types of yoga, like Vinyasa, incorporate Hatha yoga poses and may flow more quickly.

Research has repeatedly shown that hatha yoga has a wide variety of benefits for both mental and physical health. Some of the most prominent include:

Better sleep. According to a 2013 review, doing yoga can not only help people to fall asleep faster but can also improve their quality of sleep. Researchers noted that subjects who practiced yoga showed a “statistically significant reduction” in the need for sleep aids, as well.
Reduce stress. A small 2017 study found that people who did hatha yoga right before tackling a stressful task had lower blood pressure and lower cortisol levels compared to those who watched TV instead beforehand instead. Participants in the yoga group also reported feeling more confident about their performance during stressful tasks.
Improve balance and core strength. Volunteers in a 2016 study who did just 21 days of hatha yoga training improved their core muscle strength as well as their balance.
Relieve neck and back pain. A 2008 review found that yoga can help prevent and manage lower back pain by improving posture, strengthening core muscles, and correcting the spinal imbalance. A 2019 meta-analysis also found that yoga can improve the range of motion in the neck and reduce the intensity of neck pain.
Lower levels of depression. According to a 2013 systematic review, yoga can boost levels of feel-good neurotransmitters like serotonin and gamma-aminobutyric acid, which calm and regulate mood. The same review found that people who did yoga once weekly reported lower scores on surveys measuring depression after only five weeks.
Strengthen flexibility. A small 2015 study found that when older women participated in 90-minute hatha yoga sessions once a week, they improved their spine and hamstring flexibility. As a result, researchers concluded that yoga exercises should be recommended to the elderly to increase the range of motion in the joints and enhance their muscle flexibility.
Enhance mindfulness. In a 2018 survey of 1,820 young adults, participants attributed greater mindfulness – as well as motivation to engage in other forms of physical activity and eating healthier – to a regular yoga practice.

What to expect during a hatha yoga class
Hatha yoga classes can range anywhere from 45 to 90 minutes long, but you can benefit from even just 15 minutes of practice.

If you’re new to yoga, Leslie says a slower-paced, alignment-based class is ideal for learning some of the most common yoga poses. She suggests looking for words like beginner, gentle, or restorative.

While many gyms and yoga studios offer hatha-style classes, you can also use one of the many yoga apps and online videos to try this style at home. However, Leslie highly recommends seeking guidance via a virtual instructor.

There are three major elements of a hatha yoga class:

Breathwork
“To start, you’ll typically focus on the breath and warm up the body with gentle movements such as child’s pose, spinal rolls, and gentle twists,” says Leslie. “You’ll continue to build heat through a flow, moving with the breath for several minutes.”

Breathing exercises might include alternate nostril breathing or the “three-part breath.”

Once you’re warmed up, you’ll begin moving through a series of yoga poses, which can range significantly in difficulty.

Hatha yoga poses may include:

Meditation
At the end of class, you’ll typically participate in a period of meditation.

Meditation and mindfulness are important aspects of hatha yoga. Some instructors may walk you through a short guided meditation, or use Tibetan singing bowls to promote relaxation.

“To let the practice settle in the body, you’ll end class in a restorative pose either seated or on your back to find stillness and reflection,” says Leslie.

Insider’s takeaway
Hatha yoga is an excellent option for any level of practitioner. It can help reduce stress, manage depression, improve strength and flexibility, and relieve pain.

Leslie adds that when starting a practice, it’s important to remember yoga isn’t about nailing the perfect pose – it’s an opportunity to relax and calm your body and mind, and requires an immense amount of patience for progress.

7 science-backed physical and mental health benefits of yoga5 exercises to fix your posture – and why good posture is crucial for your health5 health benefits of stretching: Why it’s so important and how to stretch properly, according to physical therapists should you do Pilates or yoga? Which is best for weight loss, burning calories, and toning your muscles.

Men Have Been Obsessed With Getting Six-Pack Abs for Centuries