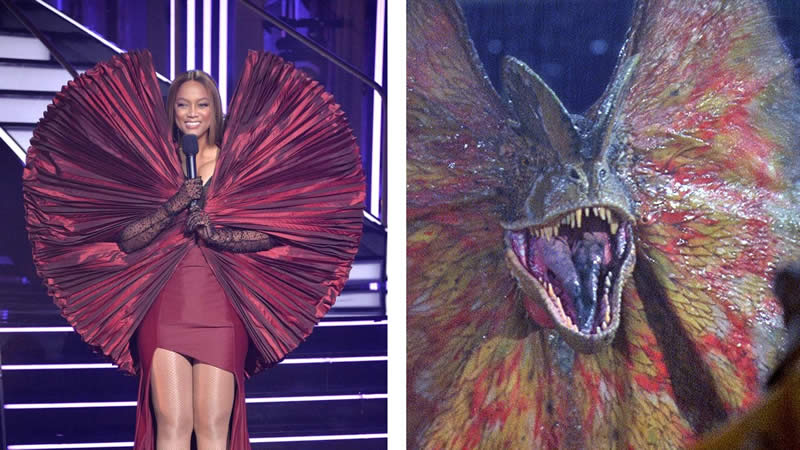 Tyra Banks has divided the audience with a “Tyrassic Park” designed by Julian Mendez.

The burgundy gown, which featured large, fan-like pleated sleeves that unfolded in wide circular forms, was worn by the supermodel to host Dancing with the Stars (DWTS) on Monday, and it was compared to the dangerous spitting dilophosaurus from Jurassic Park by many on social media.

Other commentators compared the gown to “farfalle pasta”, while others went so far as to compare it to the coronavirus.

Even the Jurassic World franchise’s official Twitter account made a comparison between their dinosaur and Banks’ appearance, asking, “Who wore it best?”

Another user was more forthright, declaring: “Tyra Banks bought this job so she could play dress up and has lost her damn mind”.

Unperturbed by the criticism of her unusual outfit, the 47-year-old came on The Late Late Show with James Cordon on Wednesday to confront the dinosaur comparisons and explain her decision.

“Different is what? Better,” Banks said. “I don’t have time to be normal in a pretty dress, because nobody is going to say anything about a pretty dress. You’ve got to push it and go for it.”

In an interview with E! Online, the TV host also revealed that the dress was influenced by her previous role as Victoria’s Secret model.

“There’s a base of that dress,” she began. “It looks like a normal, beautiful dress from the 1990s. Then I go on the stage in front of the audience and everybody, and I put on the wing thing. And everybody was like, ‘Oh!’ because they thought the first thing was the normal dress.

It’s not the first time the supermodel’s choice of outfit has gone viral.

In November 2020, Banks paid homage to Jennifer Lopez by donning a look-alike version of the singer’s classic green Versace dress on DWTS.

The model said that her version of the outfit that Lopez wore to the 42nd Grammy Awards in 2000 was created from Versace chiffon scarfs.

Earlier this month, Banks returned to hosting duties for the 30th season of DWTS.

Last year, the television personality took over as co-host from Tom Bergeron and Erin Andrews for season 29, and she also served as an executive producer on the show.

Banks began modeling at the age of 15, and by the 1990s, she had established herself as a supermodel, working with brands such as Victoria’s Secret and CoverGirl, and others.

She is the first Black woman to appear on the cover of Sports Illustrated’s Swimsuit Issue and the first female model to be on GQ magazine’s cover.