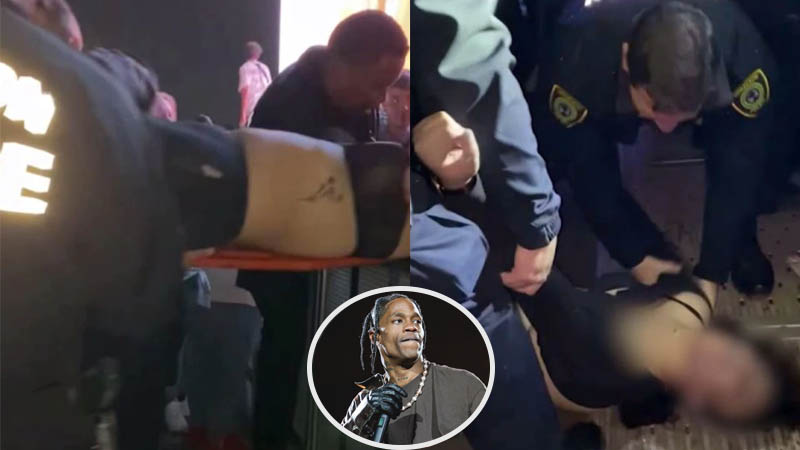 A woman who was carried out of Travis Scott’s Astroworld concert on a stretcher was dropped on her head by police trying to help victims get out of the show as fans urged staff to stop the performance.

Video footage shows the unnamed woman, apparently unconscious, sliding off the stretcher and landing on her head as rescuers rushed to help the injured in the wake of a fan stampede killing eight people on Friday.

Another video shared to Twitter shows fans calling on the crew to halt the rapper’s performance, screaming, “There is somebody dead in there. There is someone dead.”

Crew members appeared to ignore fans in the video, which shows a cameraman continuing to operate his equipment amid their pleas for help.

Another fan called out, “Stop the show”.

Fans urged the rapper to stop performing and chanted “stop the show” as concertgoers were knocked over and crushed by each other.

ICU nurse and concert attendee Madeline Eskins told Rolling Stone afterward, “Fans were recording the concert and people doing CPR. Fans were yelling at the stage crew around us, saying stop the concert, people are dying. No one listened.”

She added that while the event’s medical staff were not to blame for the tragedy, they were apparently unprepared and inexperienced.

“Some of these medical staff had little to no experience with CPR – didn’t know how to check a pulse, carotid or femoral,” she said.

“Compressions were being done without a pulse check so people who had a pulse were getting CPR, but meanwhile there were not enough people to rotate out doing compressions on individuals that were actually pulseless.

“The medical staff didn’t have the tools to do their jobs and despite the crowd around us trying to get someone to stop the concert they just kept going, even though Travis acknowledged that someone in the crowd needed an ambulance.”

The rapper was seen sobbing after the show. A source close to him told Page Six that he had “no idea what was going on, he was on stage performing.

“He’s beside himself, I’ve never heard him like that. He was in tears.”

Why Do Dogs Tilt Their Heads? New Study Provides Insight